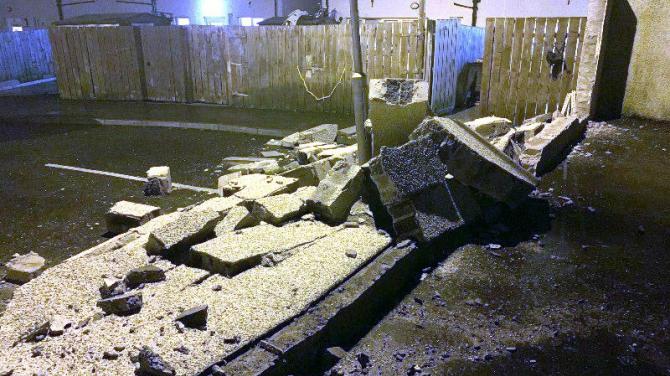 COUNCILLOR Roisin Mulgrew has appealed to those possessing a video of a Bessbrook wall being destroyed to bring it forward.

On Thursday evening (January 24) a wall in Dobson's Way was demolished amid heightened tensions between residents within the Clanmil Housing Association development.

Councillor Mulgrew explained that the situation has become so bad within the estate that a number of families are looking to be rehomed as they are “ very frightened”.

The Slieve Gullion councillor has now called on Clanmil Housing Association to remove residents who are not treating their neighbours with respect, while she has also asked the PSNI to increase night time patrols until “peace is resumed”.

After speaking with Dobson's Way residents and members of the travelling community on Friday morning, Councillor Mulgrew has reminded those who destroyed the wall that the act was “nothing other than criminal damage”.

“The wall has been taken down to the rear of the houses that the travelling community live in and I know they have raised concerns with Clanmil following a very tragic accident last year,” stated the Sinn Fein representative.

“They were looking that wall to be removed to allow them to have better access so they wouldn't have to reverse within their facility.

“Clanmil can't do that because it is not compliant with planning. The wall was the property of Clanmil and whoever removed it should not have removed it and the wall will be reinstated.

“You can't knock down walls on a whim and everybody is claiming that they saw nothing, part of that is because they don't want to put their hands up and say 'we did it' or because people will say 'we saw who did it but we're frightened'.”

Councillor Mulgrew has also called on members of the public to stop commenting on the Dobson's Way issue on social media as it is “no good to the residents” and take any photographic evidence to herself or the PSNI so those who are responsible for the damage to the wall are prosecuted.

“I am a full supporter of everybody being treated as equals, everybody is entitled to live in their home irrespective of their race, religion, background or which ethnic minority they feel they belong to, but there has got to be mutual respect for people within that development,” stated the councillor.

The Bessbrook estate, which was built four years ago, has had issues in the past with drug related crime and the suspension of post delivery due to postmen being bit by dogs but Councillor Mulgrew said the “problems have been allowed to spiral out of control again”.

A spokesperson for Clanmil Housing Association stated that they are aware of an incident of criminal damage to their property in Dobson's Way and added that where a tenancy agreement has been breached by a tenant, the organisation will take appropriate action.

“Anyone with information about this incident should please contact the PSNI or make an anonymous report to crime stoppers on 0800 555 111,” said the spokesperson.

“We are also conducting our own investigation into the matter and would ask anyone with information to contact us on 02890 876 000.

“In any case, where a tenancy agreement has been breached by a Clanmil tenant, or parties connected to a Clanmil tenant, appropriate action will be taken up to and including, repossession proceedings when necessary.

“This act is particularly shocking as much positive work has and is being done by Clanmil, tenants and other stakeholders including the council and PSNI in the area.

“With these efforts ongoing, and as recently as last weekend, the PSNI attended Dobson’s Way, Bessbrook with their community engagement bus, which received support including from local councillor, Roisin Mulgrew.

“Clanmil appreciates the ongoing support of all these stakeholders.”

The PSNI has also appealed for information regarding damage to the wall.

“We are appealing for any information to be rang in to 101 quoting police reference number 879 24/01/19,” said a PSNI spokesperson.