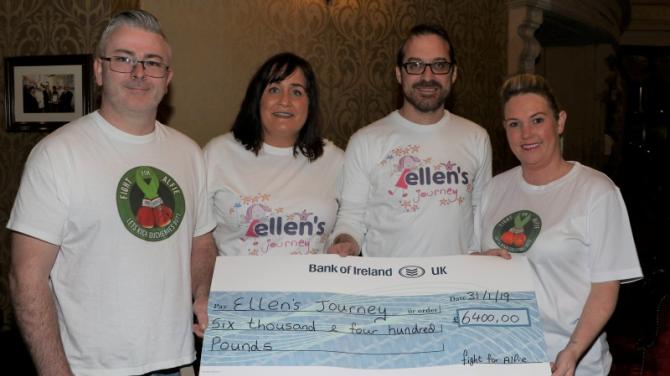 THE coaches for a white collar boxing event in the city which benefited three worthy causes have expressed their delight at the money raised.

Fitclub, who are based at Craigmore, trained the 50 boxers for the event which was organised by the fight-for-alfie charity – set up to raise money to send local lad Alfie Pentony to America for potentially life-saving treatment.

And included as beneficiaries in the impressive £19,200 total were the charity Ellen's Journey – also founded to fundraise in order to send Bessbrook girl Ellen Treanor to the states for treatment that it is hoped will save her life, and the Northern Ireland Children's Hospice.

The latter charity was chosen because the late Brendan 'Barney' Preece, who was involved with Fitclub, had a son Lorcan who was cared for by the hospice before he tragically passed away.

Kerry Haveron from Fitclub told the Democrat that the event was a tremendous success.

“Our friend Barney Preece passed away last year and we wanted to do something to honour him,” said Kerry.

“So we did the Barney legacy white collar. Barney was a cousin of Jamie Pentony, Alfie's father so we thought it was very fitting – our last one was for Alfie – then we included the Northern Ireland Children's Hospice because of Barney's young lad Lorcan who passed as well.

“Then we included Ellen because she's a local girl and we wanted to do what we could to help them.”

Fitclub have been on the go now for six years and in that time have also raised money for the Rotary club, Cancer Research and a number of other charities.

Kerry, who has been a volunteer with Fitclub for a couple of years now, described the organisation as “a wee hidden gem”.

“We were so proud, and it was an honour to be part of the white collar boxing event,” said Kerry.

“And for it to go well – we had a full house. 1,200 tickets were sold for the event and it just couldn't have gone any better.

“Everybody had an enjoyable night, everybody came in and out of the ring in one piece. They were such a lovely bunch of people.

“You could see that everybody had their individual reasons for being there, whether it was to be there for Barney, for the children's hospice, for Ellen or for Alfie. It was beautiful to be part of something like that.”

Meanwhile, Alfie's mother Colleen told the Democrat: “They are two local kids who are sick, they need all the help and support they can get. We are nowhere near what we need, but we are just going to have to keep going to try and get it, and keep pushing on and hopefully we will get him there.

Johnny Breen of the Northern Ireland Children’s Hospice added: “A huge effort went into organising this fantastic event, and there was a superb attendance on the night.

“It is community events such as this that are absolutely pivotal in ensuring that we can continue to maintain and expand the services we provide to children suffering from life limiting and terminal illnesses.

“Thank you to all who boxed in the evening, attended and contributed towards this wonderful total, and of course to Colleen and all at Alfie’s Army for including our charity in the fundraising effort.”