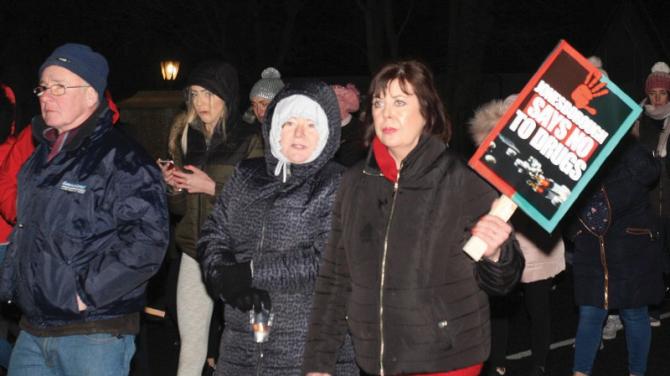 FOLLOWING an anti-drugs vigil held in Jonesborough last week, Slieve Gullion Councillor Mickey Larkin has said that the feeling is that the community has been “abandoned” by the PSNI.

The event, which was organised by ‘Jonesborough Says No to Drugs’, was held to highlight what Cllr Larkin said is a problem with drugs such as cannabis, cocaine and prescription drugs such as Diazepam and Tramadol.

Two years ago, a quantity of drugs was found in the village, and destroyed by local people. Since that time, Cllr Larkin said the issue has been consistently brought up with the police.

“The general feeling in the community is that the PSNI has abandoned them in relation to the drugs issue,” said the councillor.

“I'm not aware of any attention being brought to bear on those who are coming into the community with drugs and those within the community who are dealing drugs.

“For over two years now, myself and my colleagues have been raising it with the PSNI at every meeting we've had with them.”

Cllr Larkin also pointed out that Jonesborough is not the only village in the area to be affected by drug dealing, but said that local people had enough of a problem which he said is eroding the heart of the community.

“On the night I did say that Jonesborough doesn't stand alone, it's not the exception,” he said.

“This is throughout the district – all the towns, and all the villages are awash with drugs. The availability of them is frightening. It's so easy, and in areas you can actually see it going on in front of you.

“They could see the effect it was having on families, there was a breakdown in families, and the social fabric was beginning to break down within the village itself due to the drugs.

“This isn't just an issue for young people. Unfortunately, this is a problem that affects families, it affects parents. There is evidence of people of an older age group using drugs, and inevitably it leads to the breakdown of the family unit on occasions. This is apparent within the area.

“It's not just a case of young people taking drugs within at weekends, it actually has become embedded in the community. The drug dealers are coming in and just spreading their poison.”

One born and bred Jonesborough resident spoke at the vigil, and Cllr Larkin said that the sentiment he expressed struck a chord with all those present.

“One thing that he said was that he wanted to instil pride in the community in Jonesborough again, to take back the community from the drug dealers,” added Cllr Larkin.

“He said that as a young person growing up in Jonesborough, he loved the village, and he loved the community and he wanted it to be returned to that status for his children.

“That was something that touched everybody who was there.”

Also speaking at the vigil was Newry and Armagh MLA Megan Fearon. She called for a community and multi-agency led approach to ending the scourge of drugs in Jonesborough.

“Right across the country drugs are ruining lives, tearing families apart and running communities into the ground,” she said.

“Over recent years, this area of Jonesborough has also felt the heartbreak and pain associated with illegal substances.

“It’s vital that all agencies and the community work collectively to end the scourge of drugs from our area.

“Schools and parents must also be supported to continue to educate children on the dangers and consequences of drugs.”

The Newry Democrat contacted the PSNI for a response in relation to the comments of Cllr Larkin, but none was available at the time of going to press.

In response Inspector Corbett from the PSNI said: “Police welcome the opportunity to engage with key stakeholders and partner agencies around any issue which impacts the local community.

“Police are one of a number of agencies involved in tackling the scourge of drugs across Northern Ireland and we would hope that further proactive approaches to combating drugs in the Jonesborough area will seek police involvement.

“Police would like to take this opportunity to warn those who involve themselves in the supply and sale of any illegal substance should be under no illusion as to the commitment and determination of PSNI officers to identify, pursue and arrest anyone suspected of involvement in this criminality and see them convicted for their crimes.

“Police continue to work to keep people and communities safe and this includes taking drugs and drug dealers off our streets.

“Do you know the address of the property where you suspect drug dealing is taking place? What vehicles do you see coming and going and at what times - licence plate details are key.

“At what times do you notice increased activity around the property and are you aware of what types of drugs are being sold?

“Help us take drugs out of circulation by reporting any suspicious activity at houses or street corners in the area where you live. Noisy parties, callers at unusual hours and windows that are always covered up can be an indication of suspicious activity.

“If you have information about drug dealing, or any form of criminality, you can contact police on 101. If you do not wish to speak with Police directly you can pass the information on to your local elected representatives or alternatively information can also be provided about either incident to the independent charity Crimestoppers on 0800 555 111 which is 100% anonymous and gives people the power to speak up and stop crime.”