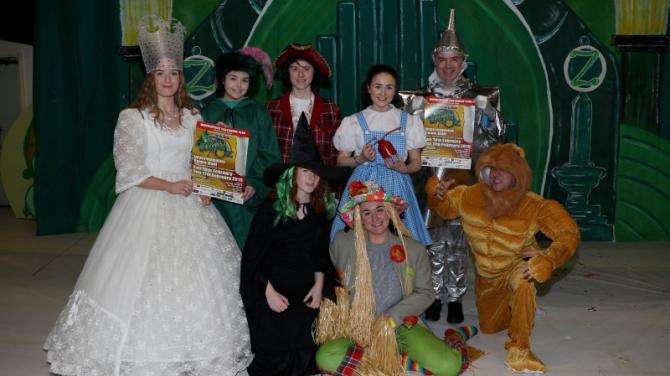 TONY Heaton has been knocking around Warrenpoint Pantomime Club for over 40 years now but is looking forward, as much as ever, to their new production.

Tony himself began his involvement with the club, now incredibly, and impressively into its 69th year of existence at a tender age, when he also acted in pantomimes.

He is backstage these days, involved in all the crucial tasks around set-building.

“I am really looking forward to it – the same as every year,” said Tony.

“I started on the stage when I was about eight, nine or maybe 10 years of age, and I've been here ever since.

“I can't just remember which pantomime it was that I started in, but there are old photographs in old books of me, when I had hair and all!

“I was on the stage up until I was 15 or 16 and then I started giving a hand backstage, giving a hand setting up scenery and making props.

“There was a man there called Anthony Quinn. Anthony taught us an awful lot of stuff. He was a brilliant joiner.”

As might be imagined, there is a serious amount of work to be got through to get a pantomime off the ground. Tony and the others who design the sets have been on the go since November, since the writer of the show, Bernie Quinn let them know what it was she was planning to put on. That allows them to get things moving.

“There is an awful lot of stuff to be done,” said Tony.

“The kids sign up and then we start moving into the Town Hall, making all the props, and then there will be people in painting the backdrops.

“I think we are the only ones who still do painted backdrops, others will use projections, we use fresh scenes.

“There are a lot of people involved in it. I'm in the backstage, and then you've Dominic Bennett and Liam Sloan, and all the girls in the make-up and costumes.

“An awful lot of free time work goes into it, all voluntary work. But everybody who's there seems to love it.”

The Wizard of Oz is, of course, a classic and well-known story. However, as is her custom, Bernie will provide Warrenpoint Pantomime Club's own special twists – thus the 'All New'. Not that Tony is about to let slip what audiences can expect.

“But you'll have to come to the show to see it! I can't give that away, it's a trade secret!”