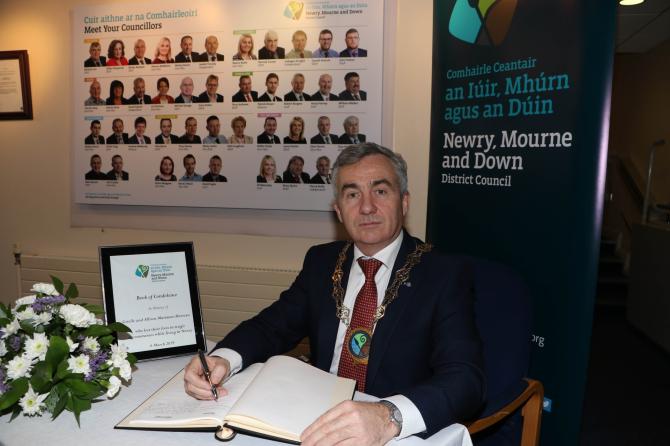 NEWRY, Mourne and Down District Council Chairman, Councillor Mark Murnin opened a Book of Condolence in the council offices after the deaths of Giselle and Allison Marimon-Herrera.

NEWRY High School pupil Allison Marimon-Herrera will be remembered for her beautiful smile.
Iestyn Brown, Principal of the school, said the entire Newry High community was deeply shocked and saddened to learn of the death of their 15-year-old year 11 student.
Allison’s body was found along with her mother Giselle at a flat in Glin Ree Court, Newry, on Thursday morning (March 7), as well as the remains of Russell Steele.
“Allison was a talented, kind, courteous and well-mannered pupil with a beautiful smile,” said Mr Brown.
“Both staff and pupils are profoundly saddened by her death and she will be remembered with great affection by her fellow pupils and staff alike.
“Our hearts go out to Allison’s family circle; they are foremost in our thoughts and prayers at this sad time.”
Meanwhile, Newry and Armagh MLA Justin McNulty stated that a “dark cloud” had been cast over Newry following the gruesome discovery.
“My thoughts and prayers are with the family and close friends of the deceased,” added the SDLP representative.
Newry and Armagh’s DUP MLA, William Irwin, also spoke of his sadness and concern.
“This is an awful tragedy and I understand police have commenced investigations into this very concerning discovery,” said Mr Irwin.
“I extend my sincerest sympathy, thoughts and prayers to the wider family of the deceased individuals at this awful time.”
Newry SDLP councillor Michael Savage, who laid a wreath at the murder scene on Friday along with Mr McNulty and the Chairman of Newry, Mourne and Down District Council Mark Murnin on behalf of the people of Newry, welcomed the swift response of the Southern Trust in providing counselling to family members, friends, neighbours and classmates of the deceased.
“Along with the council Chair, [Justin McNulty and I] paid our respects to those who died in this terrible event which has shocked and touched the hearts of the people of our city,” stated Councillor Savage.
“We wanted to express our sympathies on behalf of the people of Newry and District to the families of those involved in this tragic and shocking incident.
“I spoke with Council CEO Liam Hannaway on Thursday afternoon to see what we could do to support the families and those close to the deceased and he contacted Shane Devlin CEO of the Trust who confirmed that a full counselling support initiative has been activated.
“I would also like to pay tribute to the local PSNI for their professionalism in dealing with a very distressing incident and the manner in which they engaged with residents of the area in very traumatic circumstances.”
Sinn Fein’s Newry councillor Charlie Casey, explained that the community was in shock after learning the news of the deaths and encouraged anyone with any information to bring it to the PSNI.
“My thoughts and sympathies are with all of those involved in this incident and their families,” he said.
“Details are still emerging and a police investigation is underway and that should be allowed to proceed.”
Ulster Unionist councillor David Taylor also expressed his sympathies with the relatives of Giselle and Allison.
“There is understandably great shock within the local community regarding this news and my thoughts and prayers are with the family members of the deceased at this time,” said the Slieve Gullion councillor.
“Obviously the PSNI are in the initial stages of their investigation into this incident and they will need time to establish the full details as to how these three tragic deaths have occurred.”

The Books of Condolence are available for signing Monday to Friday from 9am to 5pm at Warrenpoint Town Hall, Down Arts Centre and Downshire Civic Centre, District Council Offices, Newry, Ballynahinch Market House, Crossmaglen Community Centre and the Newcastle Centre.

Get this week's Democrat to read our full coverage into the Glin Ree Court deaths.