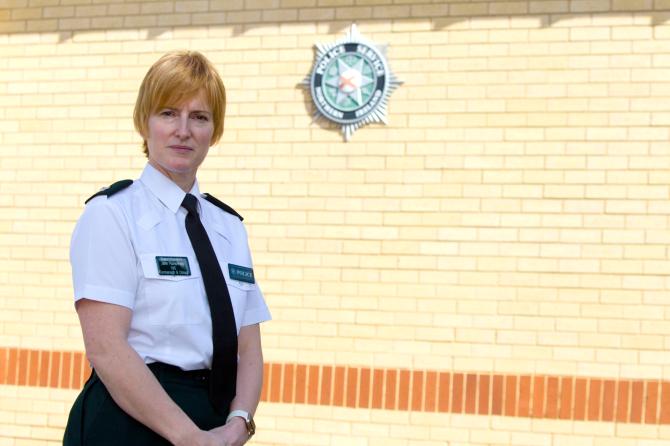 A DERRYBEG family have stated they have “little, or no, faith” in the PSNI following a social media post.
On Sunday, March 10, PSNI Newry and Mourne's Facebook page had shared a screenshot of a previous post made by Saoradh An Iúir - Newry.
Saoradh's post was in relation to a community engagement they held in response to two break-ins in the Derrybeg area.
Describing Saoradh's Facebook post as “#FAKENEWS”, PSNI Newry and Mourne added: “These victims of crime reported them to us, the actual police, who can do something about these crimes!
“We are also proactive around road safety and can prosecute offenders appropriately.
“I wonder what these folk do if and when they identify culprits? Sgt KG.”
However, in a letter to The Newry Democrat, the Shevlin family of Fifth Avenue, Derrybeg, who wished to make it clear that they have no political affiliation, stated that they did not contact the PSNI in regards to two break-ins involving their family.
“It's with sincere disappointment and anger that our family are forced to write this letter in response to recent online comments made by the PSNI regarding the political party Saoradh,” the family wrote.
“Twice in four months our family suffered hardship having been targeted by thieves. On the first occasion our mother, a vulnerable pensioner, was subjected to an attempted break-in.
“On the second occasion, which occurred just last week, our family car was broken into.
“Contrary to the PSNI comments we DID NOT contact them on either occasion. On both occasions our family contacted local members of the Saoradh political party as they are well known for assisting people in the area.”
The Shevlin family described PSNI Newry and Mourne's Facebook post as “slanderous” and “disgraceful”.
“I can categorically state that our family now have little, or no, faith in the PSNI, and from speaking to many friends and neighbours about their social media attacks on Saoradh, many in the grassroots community of Derrybeg have no confidence in the PSNI either,” continued the Shevlin family.
“Their comments were shameful and immature.”
Responding to the Shevlin family's letter, Newry, Mourne and Down District Commander Superintendent Jane Humphries, said she was “disappointed” to hear that they have no confidence in the service the PSNI provides.
She did confirm, however, that the police received a number of reports of theft and anti-social behaviour in Derrybeg from the beginning of March, and two calls relating to burglary in the area on March 4.
“While we recognise the importance of support provided to members of our community by voluntary and statutory organisations, it is also vital that all residents in Newry know that the Police Service of Northern Ireland is the only legitimate police force in this country,” continued Superintendent Humphries.
“We are the people who can investigate crime and bring perpetrators before the courts to answer for their crimes.
“We would not deny anyone the right to seek support from their community but it is also vitally important that crime is reported to us so that we can take the necessary steps to prevent crime and detect offenders and make all of Newry safer.”
Superintendent Humphries stated that the PSNI have worked closely with Derrybeg residents for “decades” and will continue to do so.
“While we respect the position of the Shevlin family we would like to reassure them the we will do everything we can to work to have their confidence in us restored,” she added.