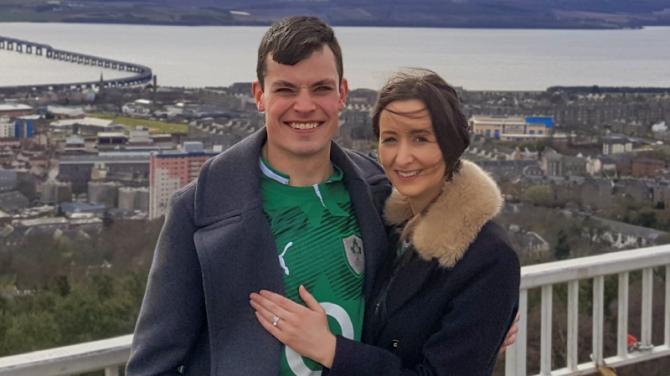 MOVE over Valentine, St Patrick’s Day may well be the most romantic day of the year.

At least, that might be the case for two University of Dundee graduates, one of whom hails from Newry.

Having first met at a St Patrick’s Day celebration in Dundee University Students’ Association (DUSA) five years ago, Ryan Stewart and Clíodhna Grant returned at the weekend, back to where it all began.

They soon had an even bigger reason to celebrate as Ryan used the auspicious day to propose to Clíodhna on Dundee’s iconic hill the Law, the highest point in the city.

“It was almost impossible to keep it a secret,” said Ryan, originally from Larne.

“However, it was all worth it when she burst into tears of joy. I’d had the ring for over a month, so it was such a wonderful feeling to finally ask her and then we had the rest of St Patrick’s to celebrate. I couldn’t be happier that we get to spend the rest of our lives together.”

Clíodhna, originally from Newry, said: “I couldn’t believe it. We had just waked up the Law and when I turned around he was on one knee. I’m so excited for this next part of our lives and the adventures we will have.”

The pair met in 2014, while Clíodhna was studying Anatomy at the University of Dundee. Having graduated, she decided to follow in Ryan’s footsteps and is currently pursuing a degree in Dentistry in Glasgow.

Ryan, who graduated from Dundee’s School of Dentistry in 2015 and now works at the Buttercup 7 Day Dental clinic in Glasgow, said that St Patrick’s Day now has a special place in their hearts.

“Now we’ve got to get planning the wedding. It’ll be a few years yet, but we reckon it’ll have to be on a St Patrick’s Day – that’s for sure.”

Dundee has become a popular destination for Northern Ireland students, with more than 560 Northern Irish students currently studying in what is known as Scotland’s sunniest city.