'The most wonderful person is my mother... I love her very much' 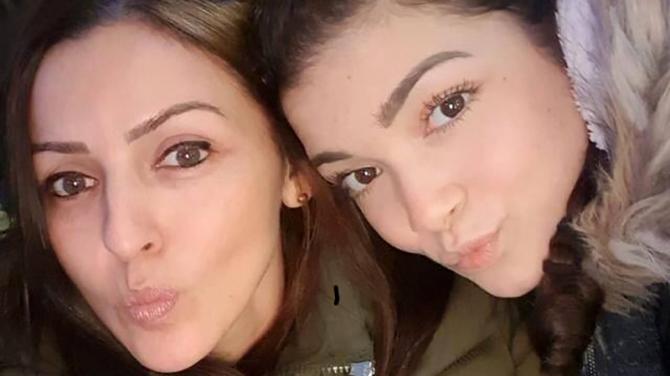 “THE best moments are with my mum.”

Those words, written by 15-year-old Allison Marimon-Herrera, resonated powerfully with those in attendance at the her funeral on Friday.

She was cremated alongside her mother Giselle. The pair were found murdered in a flat in the Glin Ree Court area of Newry on March 7.

It's believed their pet chihuahua was also killed in the attack.

Giselle's partner, 38-year-old Russell Steele, was found hanged in the flat. It is believed that he killed the pair before hanging himself.

Giselle's parents and sister travelled from Columbia to attend the service at Roselawn. Their trip was funded following a fundraising effort by the people of Newry which raised over £11,000.

Many of Allison's classmates from Newry High School were also in attendance.

The service was conducted in English and Spanish by a priest, who welcomed the family members.

“We come on this very sad occasion indeed with the immediate family of Giselle and Allison," he said.

“But we journey through the darkness of these days towards Easter, the light.”

He gave an example of the teenager's caring nature, displayed as she looked after a student who had arrived during an exchange programme.

“Allison had been like a big sister and supported Sofia,” Mr Brown said.

“It's really hard for me to stand in front of you and try and sum up what Allison was all about and what was important to her.

Reading from an assignment called 'all about me', Mr Brown shared an insight into the teenager's close bond with her mother.

Under the first heading of 'what I do', she wrote: “I miss Spain a lot, so I watch Spanish television, I really like it.

“I love arriving home from school, doing my homework while watching Spanish television.

“Above all, the best moments (are with) my mother.”

She continued: “I'm quite perfectionist, I like to do things well.

“I'm calm, I love the people around me. I try to be happy with a few things that I value very much, the little things.

“For the most wonderful person is my mother and I love her, I love her very much. Also my family, I miss them and they are very important to me.”

Mr Brown then held up the writing, showing a self portrait Allison had drawn at the bottom.

Sharing his own memory, he said: “One day I saw Allison and Sofia talk at 9,000 miles an hour in a language I couldn't understand. As the bell went they said 'adios' to each other as they were going to separate classes.

“I said adios back and they both beamed a lovely smile. It's that smile that we've been talking about over the past couple of weeks in school.”

Allison was described to the mourners as “exceptionally wise, calm and sweet but also stubborn”.

“She had opinions, she was happy to share them, but she was always respectful, well mannered and polite in how she delivered them,” he said.

“As a school community we're going to miss the lovely little light touches that Allison brought to us all every day.”

Meanwhile, Scottish Pastor Burt Garrick, of the Central Evangelical Church in Kilmarnock, also sent a message of sympathy to the family after online footage showed Steele singing in their choir.

“He would have been an occasional attender some five or six years ago," he said.

“I only came here four years ago so never met him personally; he has not been back here in my time at the church.

“This has been a very tragic situation and on behalf of the people of Kilmarnock I extend sympathies to the families of those who have lost their lives.”

Meanwhile, the funeral details for Steele, described by his brother as an “absolute gentleman” and “one in a million”, remain unknown.