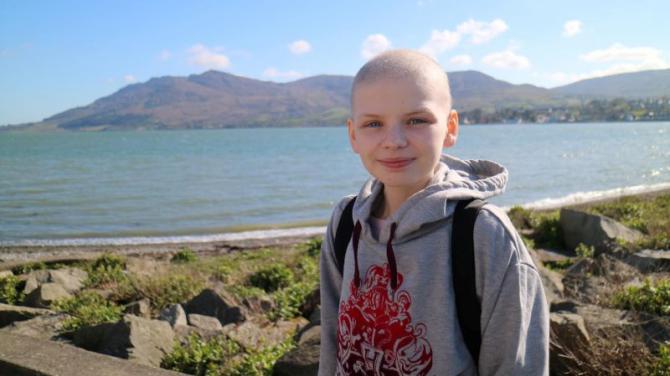 A FUNDRAISING initiative next month, organised by Mayobridge senior camogie team will raise money for Lauren Fitzgerald, whose sister Niamh plays for the team.

The 13-year-old was diagnosed with stage four high-risk neuroblastoma in July 2018. She has since gone through treatment to get her into remission, including chemotherapy and radiotherapy, while she is currently going through immunotherapy.

The aggressive childhood cancer returns almost 50 per cent of the time and when it does, survival rates drop to less than 10 per cent.

A fundraising campaign was launched by Lauren's family, from the Rathfriland Road in Newry and they are aiming to raise £234,000 which will allow her to receive treatment in New York, that is showing promise in reducing the chances of relapse.

Manager of the camogie team, Tim Colhoun said it was important for him and the team to come out and support their team mate.

He said that when Niamh joined the camogie team he had not made the connection that she was Lauren's sister.

“Niamh joined us for pre-season at the start of the year, having played all her underage camogie with Newry Shamrocks, and is such a committed and hard-working young girl,” he said.

He said Niamh, who is an Upper Sixth pupil at Sacred Heart Grammar School, is a “quiet girl” who would “never tell what is going on at home”.

“It was by chance a few weeks ago that I made the connection that Niamh is Lauren's older sister when I looked at the 'Lauren's Adventures' page and saw the family photographs.

“I have never met the Fitzgerald family and Niamh is such a quiet girl, she never mentioned a word of the battle young Lauren is going through.

“Having seen the large sum of money Lauren needs to raise for treatment in America, I thought it was the least Niamh’s team mates could do to organise our own fundraiser to help in a small way and show our support for the Fitzgerald family at this difficult time.

“We’ve a panel of 36 girls on the senior panel, so after speaking with a few of the girls we came up with the idea of having a trek. Local photographer Brendan Monaghan is always posting pictures of his climbs up the Mournes, so I asked him would he lead us on our climb and as always, he is only too happy to help.”

The initial plan was for the team to climb Slieve Binnian, however Tim explained that they will now walk to the summit of Slieve Martin.

“We will set off early, at approximately 8.30am on Saturday, May 4, and it is hoped that a few more of the teams in Mayobridge will join us, together with committee members and people from the Mayobridge community,” he said.

While they don't have a particular target set for fundraising, Tim said he was hoping for a good turnout on the day.

“I’m hoping for a figure of 100 walkers but the more the merrier and every additional walker is another pound in Lauren’s fund and that’s what it’s all about.

“We haven’t really set a target for the fundraiser but we would like to raise as much as we possibly can for Lauren and her treatment fund. We are opening up the walk to anyone who would like to join us and support the 'Lauren’s Adventures' fundraising for a minimum contribution of £10 per person.”

Tim said that while he doesn't know Lauren or the family, he said it was important to help where they could.

“It's about the team supporting Niamh. It's us doing it for her and her family,” he said.

If you are unable to join our walk, you can donate using the link https://solvingkidscancer.org.uk/campaig…/
lauren-fitzgerald/