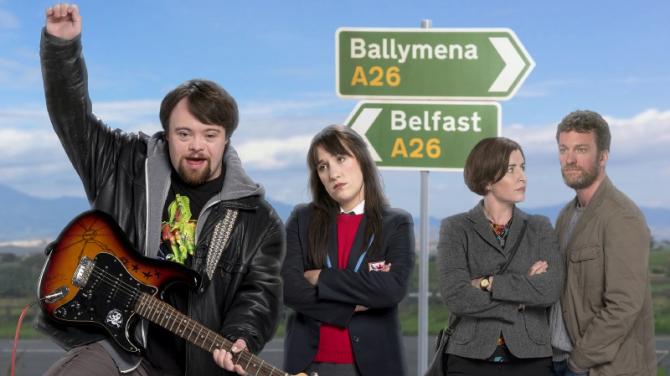 NEWRY man Eoin Cleland has made a wonderful film, and one that deserves to be seen and enjoyed as widely as possible.

Ups and Downs tells the story of a brother and a sister heading off on a road trip to see an Ash gig in Belfast, much to the dismay of their mother.

The brother, you see, is 22-year-old Conal (played by James Martin), who has Down's Syndrome, and the sister is an 18-year-old school girl, Gemma (played by Rosie Berry).

Their mother Fionnuala (played by Susan Lynch) teams up with her friend Fergus (played by Keith McErlean), to chase them down.

The film is beautifully shot in Belfast and surrounding locations, is perfectly paced and engages you fully throughout.

At its heart it is a story of a music-obsessed young man yearning to break free of his constraints, and to have a bit of craic with his sister before she heads off to university in Scotland. It is by turns romantic, boisterous, funny and sad. And all this in just one hour.

Eoin said he wanted, for his main character in the film, to get away from cliché in putting someone with Down's Syndrome on screen.

“And I love eighties road trip movies. I love Stand By Me, Ferris Bueller's Day Off and Planes, Trains and Automobiles.

“And I always thought what would my version be? My sister Louise has Down's. I'm the youngest of seven children, and Louise is the second youngest – so we were very close in age growing up.

“And on TV or in film, people with Down's tend to be either these perfect huggy angels who exist only to spread a joy and dispense accidental wisdom, or a terrible burden who is out of focus in the background as Mum cries counting pennies in the living room.

“I know it’s not like that. They’re just like everyone else’s sibling. You love them, but they wind you up. Growing up, they're like everyone else in your family, you're annoyed they ate the last of the good cereal, broke your toys, want to watch rubbish TV, get let off with murder by your parents.

“I wanted to see someone with learning difficulties on screen who was an actual human being, and write them like I would any other character. Conal has his own goals, his own story, but he also has his own flaws.

Ups and Downs is one of two stand-alone dramas made as part of BBC Northern Ireland’s pilot New Perspectives initiative. It will be shown on BBC1, Monday, April 22, at 9pm.

Eoin has hopes that it will be made into a series. Certainly, he has written this film in such a way that you could easily see it becoming a northern version of something like The Young Offenders.

He has drawn characters that it is remarkably easy to like (that is also, of course, a testament to the performances of the four main actors, who are all superb), and left plenty of scope for developing them.

“We'd love to do more,” said Eoin. “I've been chatting to James and Susan and Keith. There's so much more you could do with those characters, with the band that Susan is interested in and that sort of stuff. There's plenty more stories and legs in those characters.”