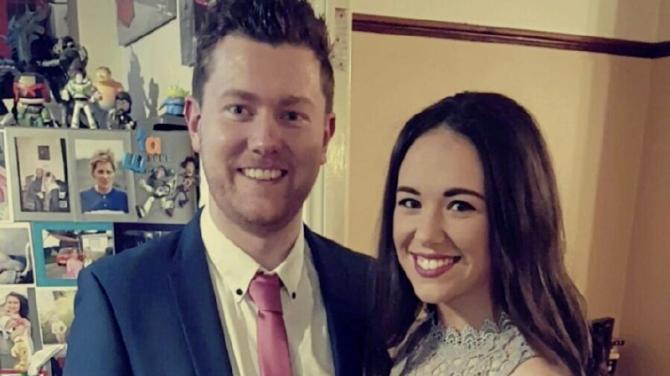 A CHARITY gaelic match with a special twist celebrating the life of the much-loved Karl Heaney takes place in Ballyholland Harps GAC this Saturday.

The popular Newry man was tragically killed in a roadside collision on the A1 motorway on May 23 last year and, as the anniversary of his death approaches, his family have decided to honour his memory with a Marvel-themed exhibition match between the 'Down Defenders' and the 'Armagh Avengers' to reflect Karl's lifelong love of comics.

Speaking to The Democrat ahead of the event, Karl's partner Ciara Sands reflected on her 27-year-old boyfriend's compassion, kindness and larger-than-life personality as Newry people get ready honour one of its favourite sons.

Ciara said, “We decided that we wanted to something in memory of Karl coming up to the first year of his anniversary. We wanted to do something positive for everyone to remember him in a good way and we thought what better way to have a big memorial day.”

Acting as something of a pre-cursor to the Armagh-Down championship clash in Pairc Esler the following day, the match kicks off at 5pm and sees former county stars Mickey Linden, Benny Coulter, Dan McCartan, Shane Mulholland, Ronan Murtagh, Steven McDonald, Ciaran McKeever and Justin McNulty line up and take to the field for the fun-filled clash.

Ciara said that they had to put their own twist on affairs to reflect Karl's unique personality.

“It had to obviously have some sort of sports involved for Karl and because Down and Armagh are playing the next day in Newry we thought it would be like a pre-match showdown between the two counties and to get a bit of rivalry going ahead of the match,” she said.

“Then we put a bit of a Marvel spin on it so as not to confuse people, so we have the 'Down Defenders' vs the 'Armagh Avengers', just in case people are thinking it's the real teams playing.”

Ciara said there will be food, drinks, music and a charity auction in Ballyholland Club after the match that will see old friends unite, reminisce, reflect and rejoice in memory of Karl.

“We had to do something that he would have approved of so we're planning on having drinks and a bit of music afterwards because that's what Karl would have loved.

“He loved sports and he loved a bit of craic so it would have suited him down to the ground, so that was the idea,” said Ciara.

“We're raising money for two charities - Head Injury Support in Newry and RoadSafeNI, the Newry, Mourne and Down Committee, two charities that have helped us over the past year.

“We just want to give back to them, and they're charities that we think don't get enough recognition in the community for what they do.”

A former Newry Mitchels stalwart, Karl had worked as a teaching assistant in Aquinas Diocesan Grammar School in Belfast for a year and was scheduled to move to London last September along with Ciara, after he had been accepted onto a PGCE teaching training course.

Ciara said: “Karl was as large as life, he was so happy all the time, he got on with everybody and everybody got on with him. Nobody could say a bad word about him because he was always smiling and always laughing,

“He was just going to start his career in PE teaching and his year working in Aquinas proved that it was definitely the career for him - he was so good at it.”

Ciara hailed the community spirit of Ballyholland as she thanked those who rallied to help the family in organising the event.

“The amount of support we've got has been great,” she added.

“We have had people coming along to say they can help us and donate prizes for it.

“We're honoured by all the players, especially the ex-county player, to have come forward to say that they can play.

“Ballyholland have been amazing in letting us use their facilities and have been so helpful. It just gives you a real sense of community again. It wouldn't have been possible without everyone's help.”

The 25-year-old added: “It shows that we haven't forgotten about Karl but neither have other people and it's keeping his memory alive.

“So we just want everyone to come along to raise a bit of money and to remember Karl and celebrate his life in the best way,” said Ciara.