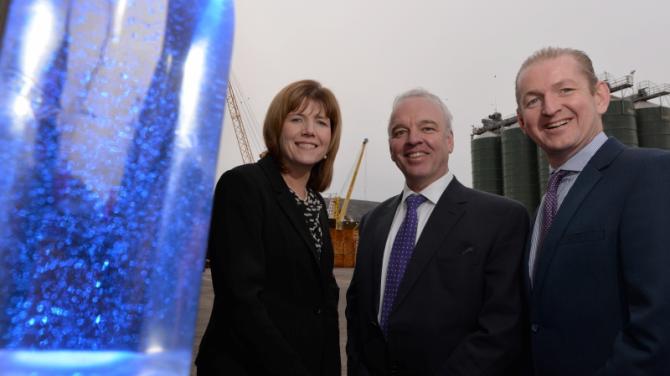 The £9.5million (€11m) project represents the first major investment in Ireland by the firm since it purchased Praxair Gases Europe in December 2018.

The facility which will store liquid CO2 for the food and drinks industry across Ireland, aims to significantly improve security of supply for the gas on both sides of the border, and also lead to a major reduction in carbon emissions by minimising the need for road tankers.

Work is due to commence this summer on the construction of the facility, which is expected to become operational in Q2 2020.

Clare Guinness, CEO, Warrenpoint Port, commented: “This investment by Nippon Gases is a major endorsement of Warrenpoint Port and recognises the benefits provided by our unique position equidistant between Belfast and Dublin that ideally places the harbour to facilitate the distribution of goods across the whole of Ireland.

“The commencement of construction work on the terminal soon will signal the final stage of a scheme that we have been working on for some time.

“The project represents another important element in our efforts to enhance Warrenpoint Port’s offering and cement our position as a catalyst for economic growth in the local region and further afield.”

The establishment of the liquid carbon dioxide import terminal, which will have the capacity to hold approximately 2,500 tonnes, follows a major shortage of the gas experienced in Ireland and United Kingdom during the summer of 2018.

Gerard Dore, Commercial Manager, Nippon Gases, added: “CO2 is a key ingredient in the production of food and beverages. People know that it adds the fizz to drinks.

“Many are not aware however that it is also used in the processing of meat and food products.

“Food applications include modified atmosphere packing, chilling and freezing of foods. It is also used in the production of dry ice which is used in airline catering, online food sales plus transport of pharmaceutical and clinical products.

“However, with no significant native source of liquid Carbon Dioxide on the island of Ireland. All liquid carbon dioxide is currently imported by all the industrial gas companies daily into Ireland via road tankers coming across the Irish Sea.

“Nippon Gases already own a number of CO2 terminals and ships in North West Europe.

“With this investment in Ireland, Nippon are changing the supply chain radically for their Irish customers by importing via ship rather than road tanker.

“It is worth noting that one ship will be the equivalent of 90 road tankers coming across the Irish Sea. The carbon footprint reduction is very large.

“In addition we are also linking in with the more abundant CO2 source region of continental Europe, namely Netherlands.

“This is important as the British Isles currently do not produce sufficient quantities of CO2 for their annual usage.

“This facility will ensure we can continue to guarantee into the future food grade, completely traceable liquid Carbon Dioxide that Irish industry both North and South of the border desires.

“We are delighted to be working with Warrenpoint Port on this exciting venture and look forward to commissioning the terminal next year.”

The works are in addition to Warrenpoint Port’s £4m capital investment programme that includes a reconfiguration of internal infrastructure and the regeneration of the landmark Town Dock House building that will re-establish an interface between the harbour and the town.