'Only for Daisy Hill I wouldn't be here today' 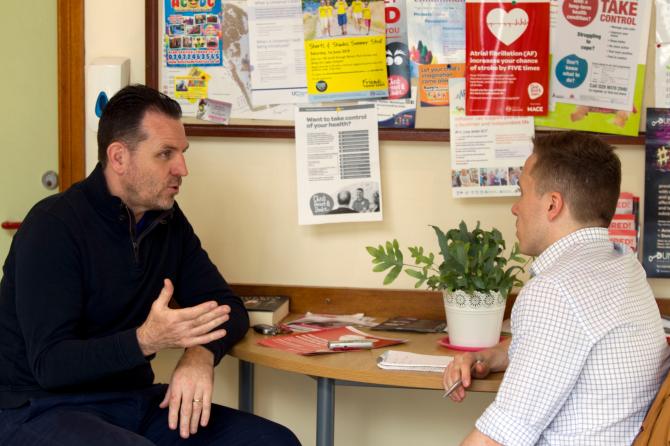 Over the next four weeks, the Newry Democrat will run a series of interviews with those who have benefited from the world-class care from Daisy Hill's Stroke Unit.
This week, we speak to Down's All-Ireland winning Miceal Magill, who said that if it wasn't for the immediate care he received he wouldn't be alive to tell his story.
The public consultation on "Reshaping Stroke Care" will close on Friday, July 19.

DOWN'S 1994 All-Ireland winning Miceal Magill, has said that closing Daisy Hill's Stroke Unit would be a “disaster” after suffering a stroke himself just two years ago.
On April 4, 2017, the current Assistant Manager of Whitecross was going about his daily morning routine when he and his family had the biggest fright of their lives.
At 7.45am that morning, Miceal realised that all the power had left his body after dropping a glass of water on the upstairs landing, before his son, Danny, saved him from falling down the stairs.
It was at this point that the Warrenpoint man's left side of his body underwent paralysis and thanks to the quick thinking of his wife Nuala, who managed to get him in the car with the help of their sons, Miceal arrived at Daisy Hill's A&E within 12 minutes.
Recalling that horrific experience, the 48-year-old explained that when he arrived at the hospital he had no feeling on the left side of his body, he lost his ability to speak and his eyesight had gone for a brief period.
Describing the care he received at Daisy Hill as “absolutely unbelievable”, Miceal spent the next six days in the stroke unit.
“When I went into the Accident and Emergency Department, right through to when I left, they were absolutely sensational as was the aftercare I received,” he said.
“I remember getting the tests done and the heart scans, which were basically an elimination of what had happened.
“I work in a very stressful environment with regards to my own business [Michael Magill Entertainments]. That January, February and March had been overloaded with work so they said that it was totally stress related with regards to cholesterol level and blood pressure level.
“I come from a massive sporting background, I'm a gaelic coach, I coach three or four times a week and kept myself relatively fit so it was a major, major shock and I think they were quite shocked too.”
If Miceal had of been forced to attend Craigavon Area Hospital for help, he would have gone at least another 40 minutes before receiving any treatment.
Outlining his total opposition to any possible closure of the Daisy Hill Stroke Unit, Miceal added that if it wasn't for the Newry hospital he wouldn't be talking about his experience today.
“Daisy Hill were absolutely unbelievable from the nurses and doctors to the after team,” he continued. “It was fantastic.
“If I had of went to Craigavon at that particular time, you just don't know what the traffic will be like if you're going through Banbridge then into Gilford.
“Without a shadow of a doubt Daisy Hill saved my life, not only did they save my life but they saved my family life in regards to being a father of five kids and a having a wife.”
Despite living a healthy lifestyle and having a huge sporting background, Miceal was shocked when he suffered a stroke but his experience has made him realise that it could happen to anyone.
“It would be an absolute disaster if Daisy Hill's Stroke Unit closed,” he stated.
“Everybody lives such a high octane life now and nobody seems to have their own time any more in life.
“There were five other people in the ward beside me but three of those were under the age of 50, which was absolutely frightening.
“It was only then, whenever I was lying in the ward, I said, 'this can happen to me and it will continue to happen to other people'.
“We need this service in Newry and Mourne.”