Daisy Hill offers the best stroke care team there is 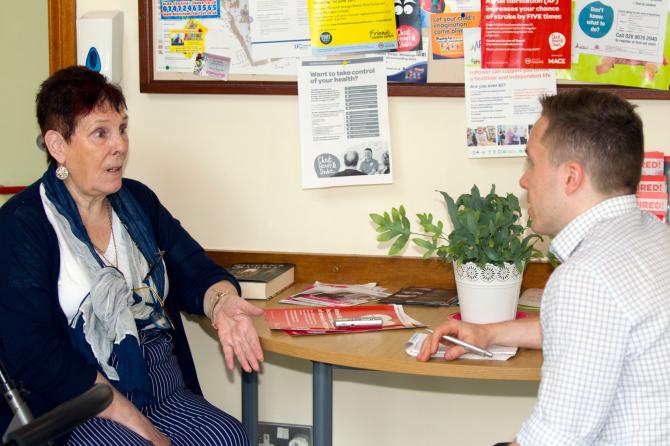 In week two of the Newry Democrat's series of interviews with those who have benefited from the world-class care from Daisy Hill's Stroke Unit, we speak to Rosaleen Moore.
The Warrenpoint woman suffered a stroke five years ago and said that if she had been forced to travel to Craigavon Area Hospital, she would be dead.
The public consultation on “Reshaping Stroke Care” will close on Friday, July 19.

“IF you were to travel to Craigavon you could be dead”.
That's the thoughts of Rosaleen Moore, who suffered from a small stroke in 2014.
Speaking to the Newry Democrat at a Chest, Heart and Stroke meeting in Bessbrook Community Centre, the Warrenpoint woman questioned the quality of aftercare she would have received if stroke services were centralised in Craigavon Area Hospital.
Rosaleen's stroke occurred after a fall at her home, which resulted in the right side of her body being affected and losing her ability walk.
Thankfully, with the support of a walker, Rosaleen is on her feet again and said that couldn't have happened without the fantastic care she received at Daisy Hill's Stroke Unit.
“They kept me in for over a week and they were marvellous,” she stated.
“They did every test and every follow up was brilliant.
“I just wouldn't be here without Daisy Hill. No matter how small or large a stroke it is, it's still a stroke and we all feel the same way.
“The staff were brilliant, absolutely brilliant. “When you were taken in by ambulance you were seen straight away in A&E.
“They were with you every step away from all the tests right through to an x-ray. You just couldn't do without it.
“If you had to go to Craigavon you mightn't even get there.”
Rosaleen admitted that she would have been much worse off if the stroke unit in Daisy Hill didn't exist and reaffirmed her belief that it must remain open for those who may face what she has.
“It helped me and the follow ups in the aftercare were just fantastic,” she added.
“If you were to travel to Craigavon you could be dead.
“If I had a worse stroke next time and I had to travel to Craigavon I just wouldn't make it.
“It's very important to get the treatment as soon as possible because everyone's stroke is different. Daisy Hill has to keep the stroke unit.”
Praising the Chest, Heart and Stroke support group she attends every week in Bessbrook Community Centre, Rosaleen said that she just couldn't live without it.
“After you have a stroke and you're released from Daisy Hill, they arrange for a social worker to come round to your home, then you're put onto a course for 12 weeks before these meetings,” she added. “I live for these meetings every week.
“If you had to go to Craigavon who's going to do these follow ups?”