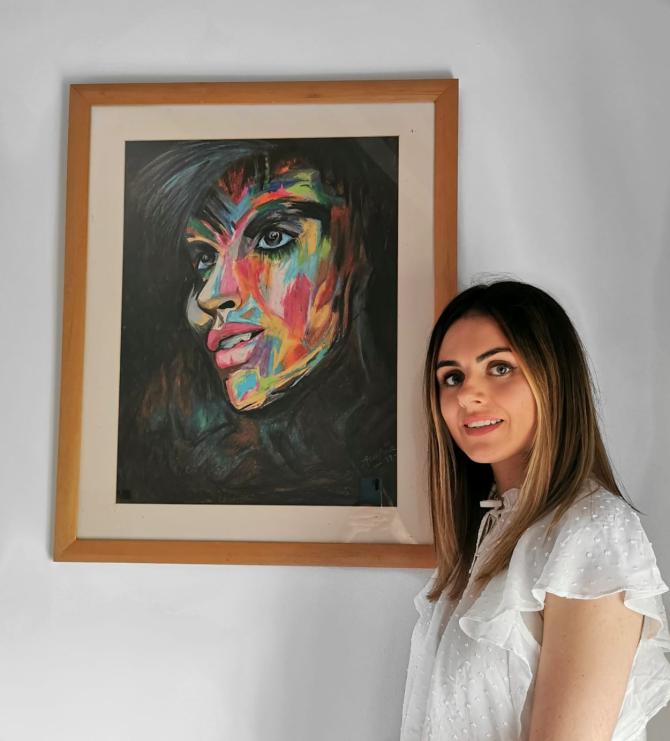 SIP SIP Hooray! Newry's very first Paint and Sip workshop comes to the Creative Space on Thursday (June 6) where casual artists and aficionados alike can pop their cork at a fun PopArt tutorial.
Launched by Studio Twenty Three, and the brainchild of the company's Creative Director Frankie Bannon, the workshop will allow absolute beginners and skilled artists to mingle, have a drink and create an acrylic canvas from scratch in a fun and laid-back environment under the expert guidance and tutelage of Frankie.
Abstract artist Frankie told The Democrat that her idea originated from similar workshops she'd devised whilst living in  Australia and said that she felt that the model could be replicated in Newry on returning to her home-town.
“It started off over in the Caribbean, my sister lives over there and she had an artist come over to her home and do a 'Paint and Sip',” she said.
“This was about three years ago and she was telling me about it and I decided to run one when I lived in Sydney with a group of girl friends, just to test the water and it got a really good response.
“I ran a few of those along with my acrylic workshops over there and when I came home I decided to that I would trial it out.”
Explaining the premise of her concept, Frankie said: “It's a two-hour workshop and every workshop will be themed.
“The first theme that we're going to do is PopArt and what they'll do is basically, timed to some some music, is a step-by-step version of a PopArt.
“All materials are provided including glass work, aprons and all they need to do is bring their own bottle of whatever they want to bring; wine, gin, beer or whatever they want to bring.
“We've a fridge there to keep their alcohol cool, so everything's provided. So people just bring themselves and a bottle.”
“At the end of the two hours they will go home with their canvas.
“It's just a bit of banter and a bit of craic and when I did it over in Sydney you would look down into the crowd and people would be painting each other's faces.”
The fashion and textile graduate said that complete novices shouldn't be deterred due to the step-by-step nature of the tutorials.
“You do not need any prior experience with art at all,” stated Frankie.
“A lot of people who come to these workshops say always say 'I'm not even creative, I couldn't draw a stick man', but it's really easy to follow and what I will do is give people the option for pre-sketched canvasses as well.
“We show you how to mix the paint, what colours to put but the other thing is as well that you don't have to paint what we're doing.
“If you decided that you'd rather paint something from your head then you can do that as well, so you're not bound by exactly what we're doing.
“This isn't about a technical painting class, it's just really a social event and something a little bit different than just going to sit in the pub and it's a great creative interaction with your mates.”
For Frankie, whilst the emphasis is placed heavily on fun, as opposed to creating masterpieces for the Louvre in Paris, however, she feels from experience that the chilled-out environment often enables people to lose their inhibitions and discover a skill they didn't feel they had.
“It's a way for you to unwind. People associate having a glass of wine with unwinding at home and this is gong to be a similar situation.
“But apart from that it's just playing some really good tunes, having a drink and doing a little bit of fun art activity.
“People lose their inhibitions in a fun environment because you don't feel under pressure that anyone's looking at you.
“You don't really care what it turns out like because it's the process of doing it that's fun.
“It's not about producing masterpieces that are going to be hung up in a gallery, it's about having an absolute laugh.
“I'd love to see more creative people and places come into Newry,” added Frankie.
The cost of the workshop is £28 per person and booking is essential. To book your place contact Frankie on 07759 370 421.