Fun in the sun at St Patrick’s fun day 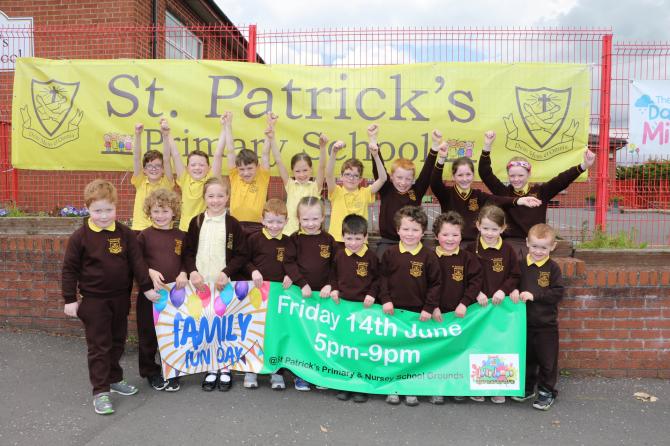 PUPILS from St Patrick's Primary School, Mayobridge, invite you all to come along to their fundraising event this Friday (June 14) from 5pm to 9pm in the school grounds. LB2475

A SCHOOL fun day in Mayobridge this Friday (June 14) is the culmination of a year-long fundraising campaign by a group of parents which has yielded around £30,000.
Spurred into action to address a budgetary shortfall at St Patrick's Primary School, the enterprising collective of parents embarked on a fundraising campaign last October to ensure that their child's education didn't suffer as a result of the deficit
One of the parents, Danielle De Rose, spoke to The Democrat about the campaign and how the entire community rallied together to get behind it.
“Over the past year we've had a mission to fundraise to make up the deficit in the budget from Stormont that all schools are facing, so we gave ourselves a year to accomplish as many fundraising activities as we can,” she said.
“This is really the final big party that we're doing for ourselves to raise some funds for the school.”
The fundraising initiative was spawned by a member of the school's Board of Governors outlining the prospective cutbacks that the school would have to make if money wasn't raised.
This prompted the formation of a fundraising committee, and thus, their campaign.
“This was an idea that came from a brainstorm group back in October and we've accomplished all of the things that we set out to do: we've ran a lottery from school; we've had a Christmas Fair; we ran a race night in March and we've had smaller things like bag-packing and movie nights and stuff,” said Danielle.
“One of the Board Governors stuck his neck out and said that he wanted to do some major fundraising this year, so a group of 30/40 parents got together and brainstormed some ideas. From that a committee was formed, and now there's four of us.
“We created our own constitution, set up a bank account and have monthly meetings and we have been purchasing and using the funds throughout the year.
“We were able to buy 15 laptops and we've bought a new projector worth around £11,000, and speakers for the hall and, as far as 'm aware, it's the best in Ireland.
“We've made a couple of the walls around the school into climbing walls using foot and hand holds for the children. They were quite pricey but they've proven to be a hit with the kids.”
This year's budgetary shortfall was in excess of £30,000, which the group have admirably raised, but Danielle fears that the school's deficit could become wider every year.
“The trouble is that this is going to be an ongoing thing, so next year there'll be an even bigger deficit and this is the state of things across the UK,” she added.
Despite being evidently proud of the group's efforts, Danielle said that there is a palpable frustration amongst parents that these resources aren't able to be provided within the school's governmental budget.
“At the end of the day, they're our children, and if the government isn't going to meet the needs of the school, then we as parents have stepped up to meet the gap, but it is frustrating.
“It's not been an easy year for us to have to go out and get donations. It's been a lot of work and an awful lot of hours have been put into it.
“We've all got full-time jobs and raising families and doing this on top of that, but for the most part the community have been very supportive. When you see the children's enjoyment it makes it all worthwhile,” she said.
Commenting on Friday's fun-day, where kids can have their photos taken with motor cars and take part in a penalty shoot-out with Down legend Benny Coulter, Danielle said: “We're going to have over 20 stalls, ranging from kids toys to skincare products, we're going to have penalty shoot-out with our local legend Benny Coulter.
“There'll be inflatables from Jolly Jumps and we're going to be having a disco there and we'll be doing a children's talent show with kids from the school.”