Stroke survivors fear for those who will need Daisy Hill unit 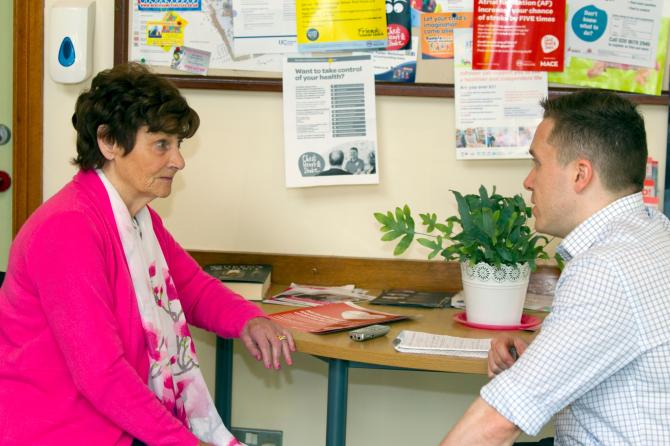 In the final week of the Newry Democrat's series of interviews with those who have benefited from the world-class care from Daisy Hill's Stroke Unit, we speak to Rosaleen Fearon and Phil Darby.
Rosaleen suffered her stroke just last year and praised the rehabilitation team in Daisy Hill, while Rathfriland man Phil said he chose to attend the Newry hospital ahead of Craigavon.
The public consultation on “Reshaping Stroke Care” will close on Friday, July 19.

JUST two days after suffering a stroke last June, the rehabilitation team at Daisy Hill Hospital had Rosaleen Fearon back on her feet.
The Newry woman couldn't praise the aftercare team enough and said that if her family had to travel to see her in Craigavon, she wouldn't have had the same support network, which was vital in her recovery.
On June 14 last year, Rosaleen was getting ready for a walk when, out of nowhere, she collapsed after suffering a stroke.
All of a sudden she woke up in the Royal Victoria Hospital in Belfast.
“My husband rang the ambulance and it came out quite quickly,” she explained. “There were two lady paramedics who carried me down the stairs and put me in the ambulance.
“They took me to Daisy Hill and there was a stroke nurse on at the time and she sent me straight to the Royal. There was a team waiting for me there and I got the clot retrieval.
“After that I was put into the stroke unit in Daisy Hill, which was wonderful. The rehab unit in the stroke unit was great.”
Speaking to the Newry Democrat from Chest, Heart and Stroke's support group in Bessbrook Community Centre, she said that if it wasn't for the rehabilitation team in Daisy Hill, she “couldn't have got here”.
Just two days after her stroke, Rosaleen was able to walk again and she puts that recovery down to the team in Newry.
“In the rehab ward there's physiotherapists, occupational therapists and everything you need to help you,” she added. “They were just brilliant.
“I had my whole family coming in to see me in the afternoon and at night. If I was in Craigavon that just wouldn't have happened. It would have been just awful.
“It was great because it gave me a support network.”
Outlining her opposition to any closure of Daisy Hill's Stroke Unit, Rosaleen said: “It would be horrendous if the stroke unit closed. If Daisy Hill wasn't there I wouldn't be here.”
Meanwhile, Rathfriland man Phil Darby, who became a volunteer with Chest, Heart and Stroke after recovering from his stroke, explained that he took ill in Banbridge and was given a choice between Daisy Hill and Craigavon Area Hospital.
For Phil, there was just one choice for him.
“The ambulance driver asked me if I wanted to go to Craigavon or Newry and I chose Daisy Hill because I thought I would get better care,” he explained.
“I couldn't have survived without Daisy Hill. I wouldn't like to see it closing.”
Phil, who suffered his stroke in October 2015, admitted that the location of his care didn't matter too much to him being from Rathfriland, but stated his concern for those who would have to travel to Craigavon from Kilkeel.
“I think Daisy Hill saved my life,” he continued. “Somebody from Kilkeel would have to travel 90 minutes to get to Craigavon.
“People talk about this 'golden hour' and that one hour saved my life.
“The staff in Daisy Hill were fantastic and everybody was just brilliant, as was the stroke ward, it was absolutely fantastic.
“I think the community would suffer a huge loss if they lost the stroke unit at Daisy Hill and there's a big, big chance that people could lose their lives.”
After recovering from his stroke, Phil began working with Chest, Heart and Stroke and hoped to become an example for those starting out on the road to recovery.
“I got better after my stroke so I try to be an example to them to show that anyone can get over it,” he added.
“I would rather get out and about and do something because I couldn't lie about the house and do nothing. People can say to themselves, 'Phil is getting about so I can too'.”

The views in this article are expressed by the individuals and not Northern Ireland Chest, Heart and Stroke.