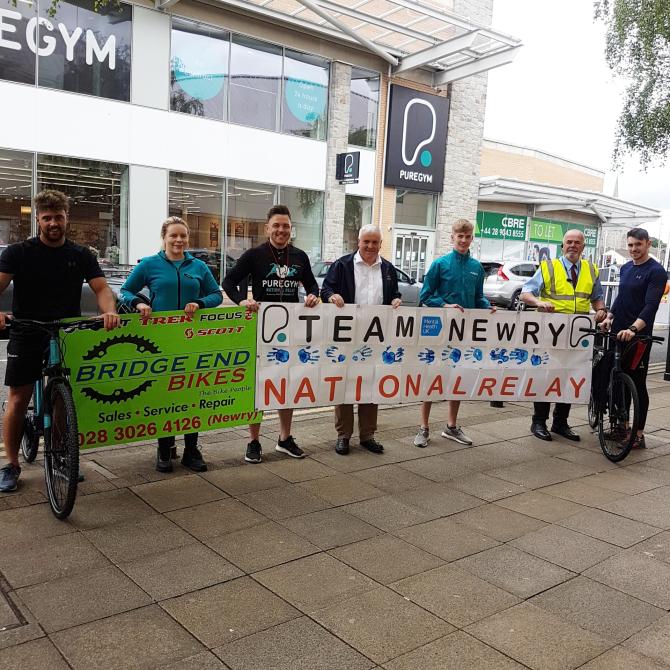 PUREGYM staff members getting set for their cycle from Newry to Lisburn last Wednesday (June 19).

STAFF from Newry PureGym cycled from Newry to Lisburn and back again on Wednesday (June 19) as part of a seven-day national relay in aid of Mental Health UK.
Proving themselves to be wheelie good at sports, Adam Mitten, Colm Donnolly, Caolan Wrey and Gemma O'Hare donned their lycras and took to the roads as part of PureGym's efforts to raise money and much-needed awareness on mental health.
PureGym Newry Manager, Adam Mitten, despite being really, erm, tyred, graciously spoke to The Democrat after the event about his crew's exploits: “It was a national relay held by PureGym. Three members of the fitness team; so it was myself, Colm Donnelly and Caolan Wrey, with Gemma O'Hare driving in a support car. It took us three-and-a-half hours to get there.
“We've raised just under £900 at the minute and the good thing was that there was a lot of support from the local community; form the members, local businesses and the team themselves.
“We've done sponsored classes and visited local businesses, so everyone's pitched in, which has been good.”
As someone who's worked in the fitness industry for almost 15 years, Adam has seen first-hand an increased diversity in the membership of gyms, with many people now going to the gym as much for their mental health as for the physical benefits.
“Previously most people would have been going to the gym and exercising for the aesthetic and just for looks and body shape,” he explained.
“But now a large percentage of people are going to the gym for their mental health.
“The fitness industry is having such an impact on mental health and obviously PureGym have became aware of that, so that's why they decided to come on board and play their part.”
Adam believes that there's a pressure on people to maintain and uphold a certain look in the modern world which is only exacerbated by social media.
This, he feels, can impinge negatively on peoples' mental health.
“Personally I've found that social media has catapulted this industry in terms of it being trendy to go to the gym,” he said.
“I've found that social media has added that kind of pressure onto people to look good and feel good, that's what I personally think.”
Talking about the increased number of people being referred to gyms by their GP for their health and well being, Adam added: “There's a massive amount of referrals that come into the gym now.
“Because mental health is so common in your everyday life and your work life and home life, it needs as much support as it can get and you hope that the funding is made available.”
The gym manager said that smashing down taboos on mental health is very important and that creating the conversation around the issue is extremely important: “It's going to make people that maybe are suffering from more comfortable that it's more accepted and that it's being talked about.”