"No doubts" over Pride parade 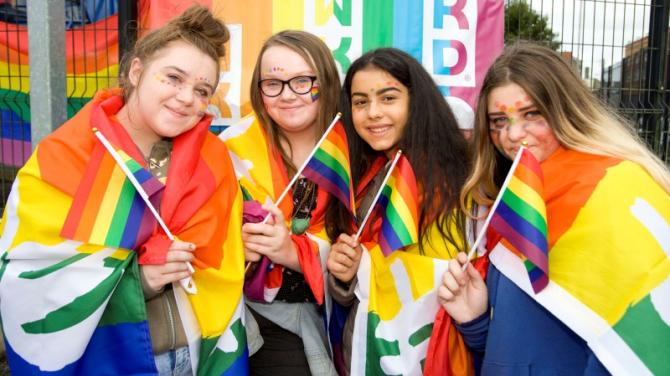 A PRIDE Newry spokesperson dismissed funding doubts over this year's festival, stating that “there is no doubt whatsoever” it will go ahead.

There was speculation circulating that a funding delay on the part of Newry, Mourne and Down Council(NMDC) had put this year's International UK and Ireland Pride into jeopardy, yet Pride Newry were quick to scotch the reports, stating emphatically that the event will go ahead “unless something falls out of the sky.”

“There is no doubt being cast by us or Newry council on the entire festival which includes the concert.”

Doubts arose after it was reported recently that Pride Newry had so far received less than half(£60,000) of the £125,000 funding earmarked for the festival by NMDC, with the council reputedly holding back from releasing the remaining £65,000 until thefestival expenditure had been verified by council officials.

The spokesperson, however, said that they have no doubts that the festival will go ahead due to legally binding documentation between Pride Newry and NMDC, which they Pride Newry believe outlines the council's comittment to the festival.

“I'm emphatically confirming that, without doubt, the Northern Ireland festival, including the concert, will proceed and I can't see that there's anything that we will do or the council will do to stop that.

Allaying people's fears of this year's festival being scuppered due to a funding shortfall, the spokesperson said: “We are confirming that the Pride parade, the Pride festival and the Pride concert are all going ahead.

“The facts of the situation with us is very clear. We have letters of offer from Newry Council so far offering up to £110,000, and there's a separate letter of offer we're talking to them about for £15,000.

“The council themselves have confirmed that it's £125,000 and it is a commitment and we fully expect the council to honour this to the penny.

“One of the funding parts relates to the artists and it just happens to be perhaps the biggest sum of money. The Council are saying that according to their policy and procedures they can't pay everything in advance of it happening, but they are considering that.

“The council have paid almost half of their commitment so far. We're very grateful for them that they've done that and we expect them to meet the remaining portion of the legal letter of offer that we have between us,” said the spokesperson.

“We have Claire Richards from Steps, Heather Small from M People, we have B*Witched, as well as other acts and all of theses acts will appear on stage completely free. It's big, we even have Sydney Mardi Gras coming from Australia and they're going to put on 'Priscilla, Queen of the Desert', and they're doing that for free.”

The spokesperson said that he expects the International and UK Pride festival to provide a significant shot in the arm for the Newry economy, with some 50,000 expected to visit the city thoruhgout the duration of the festival.

“We expect it to generate sums of money certainly in the significant millions for the area.

“We are expecting upwards of 50,000 in the town and the surrounding area to attend.

“Going forward, the council should now consider making it a festival that they find every year, the way they run their own Merchants Festival.

“ We should be on a par with that because we're bringing huge footfall and tourism into Newry, year-in, year-out.

“ The facts of the matter is that there is a letter of offer that exists between the artists and ourselves, the council have had that letter of offer since February/March of this year, so they're well aware of the contents of it.

“The council have had that contract for several months and are well aware of what the contract says and we have not been told that the council are not going to pay what they're required to pay.

“The £60,000 was for more than just acts, it was to do with other things; to ensure that we had the right stage, lighting and sound.

“As spokesperson for Pride in Newry, the artists will be paid their full amount according to the contract. We will not be in breach of contract,”he added.

A spokesperson for Newry, Mourne and Down Distrcit Council said: “Newry, Mourne and Down District Council has committed £125,000 to Pride in Newry, including an advance payment of £60,000 to the group. Further funds will only be released to Pride in Newry when their £60,000 expenditure has been verified by Council. Further funding cannot be released until this has been completed.

“The Council is committed to working with Newry Rainbow Community and other stakeholders to accommodate the use of Albert Basin and Council land, and to making the event as successful as possible.”