Parents get into debt as they face back-to-school costs 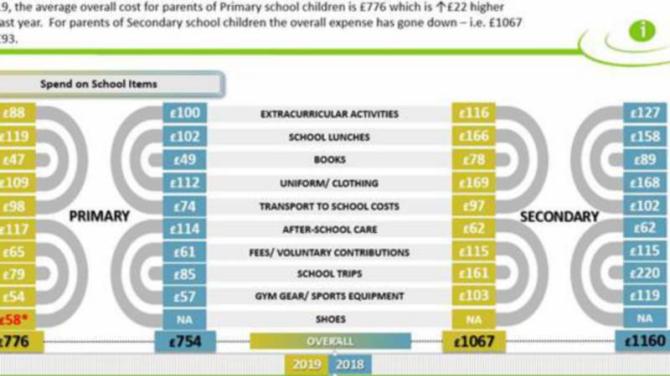 OVER a third (37%) of Northern Ireland parents continue to get into debt covering the expense of back-to-school. The numbers in debt have remained steady since last year’s survey, however parents say they are getting into less debt than last year.

Parents of primary school children say their average back-to-school related debt is £178, down £74 from £252 last year. At second level there has been a more substantial decrease in debt, falling £93 from £291 last year to £198 this year.

Of those parents in debt, over one third (35%) have used a doorstep lender or payday loan company to help cover the costs. This is a 3% drop on last year.

The findings were revealed in a Northern Ireland school-costs survey commissioned by the Irish League of Credit Unions (ILCU) and carried out by i-Reach Insights. 406 people were surveyed and 269 parents of school going children in Northern Ireland responded.

Overall, close to three quarters of parents (73%) are finding the costs a financial burden. This is down slightly on 76% last year. Almost half (48%) say that costs are their biggest back-to-school related worry. Again, a slight drop (2%) on last year. This concern is well ahead of the worry that children won’t settle or make friends (21%).

39% of parents say they will be forced to deny their children certain school items because they cannot afford them. This is up 2% on last year. Of this group, half say they will cut out extracurricular activities, up from 42% last year.

A quarter say they cannot afford new school shoes for their children, down from 31% last year. Four in ten say new gym gear will get the cut, compared with 27% last year.

Parents say they are spending £776 per primary-school child, a £22 rise since last year. Parents of secondary school-children are however significantly cutting back on the back to school spend. Costs are down by £93 since last year. The cost per child now stands at £1,067. Parents appear to be more cautious with spending on the non-essential items, with a substantial reduction in spending on school trips. This has fallen from £220 to £161. While spending on extracurricular activities has also decreased from £127 to £116.

The biggest spend at secondary school level is £169 on uniforms/clothing, followed by school lunches at £166. School trips comes in as the third most expensive item.

At primary school level, the biggest spend is on school lunches at £119. This is followed by after-school care at £117 and uniforms/clothing at £109. (See figure 1 below for more detail).

The biggest sacrifice parents have to make to cover back to school expenses continues to be family holidays. 39% of parents will cut spending on holidays this year, up from 37% last year. 25% will cut down on summer activities for their children, up from 23% last year. A significant 20% say spending on food for the family will have to be cut, up 2% since last year.

Commenting on these findings, Paul Bailey, ILCU Head of Communications, said: “The research tells us that 75% of parents are paying for the costs thro4ugh their monthly income, which is positive news. However, we are very concerned to see that the numbers using credit cards has risen from 14% last year to 22% this year. We would encourage all parents in need of financial assistance to contact their local credit union and forego credit cards completely. The interest rates charged can be incredibly high, while people are often confused about how the interest actually works. Credit union loans by contrast are straightforward, with no hidden charges and affordable interest rates which are fair and capped by law.”

66% of parents say that Northern Ireland schools are not doing enough to keep costs down. This is up from 62% last year. When asked how schools could do more to help parents, 31% said the option of generic, cheaper or even free school uniforms. 16% said reducing the prices of books and stationary.