Book of condolence to Newry businessman 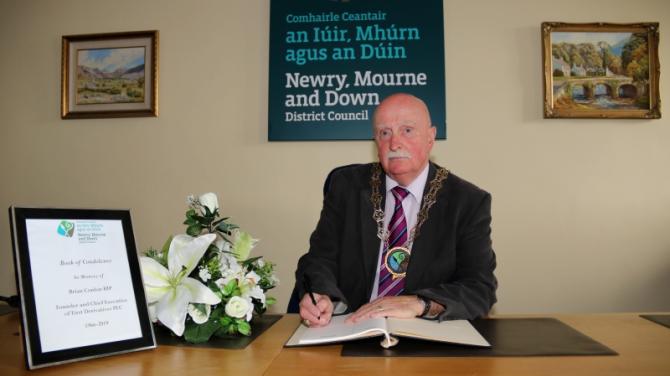 Councillor Casey said, “On behalf of Newry, Mourne and Down District Council, I would like to express our collective sadness at the news of First Derivatives founder Brian Conlon’s passing. There are few people who have contributed more than Brian to Newry and the wider region and he will be deeply missed by all who knew him.

His commitment to this region has improved the lives of the thousands who work for First Derivatives, both here and around the world, and he has played a huge role, not just regenerating the local economy, but also in creating a vibrant and prosperous society for all. By creating such a successful financial software company in this region and importantly, retaining its headquarters in Newry City during years of phenomenal growth, he has put Newry on the map.

Brian’s contribution was not just across business, he supported so many other aspects of community life in Newry, Mourne and Down, including his love of Gaelic football. He will forever be remembered as a son of Newry who deeply loved his family, his work and his community.

In time, people will reflect on the tremendous legacy he leaves behind in First Derivatives, but right now the overall emotion is one of sadness for someone who has been taken too young. Our thoughts are with Julie, his wife and mother to their two young children, Brian’s mother Josephine, sister Kathy and brother Ciaran, the wider family circle and his closest colleagues who have been left devastated by this news.

In recognition of the contribution and esteem that Brian was held in, the Council will be opening a book of condolence in the following Council premises from 1pm on Tuesday 30 July 2019. The books are available for signing Monday to Friday from 9am to 5pm for a period of two weeks:

The Books will close for signatures on Tuesday 13 August 2019.”