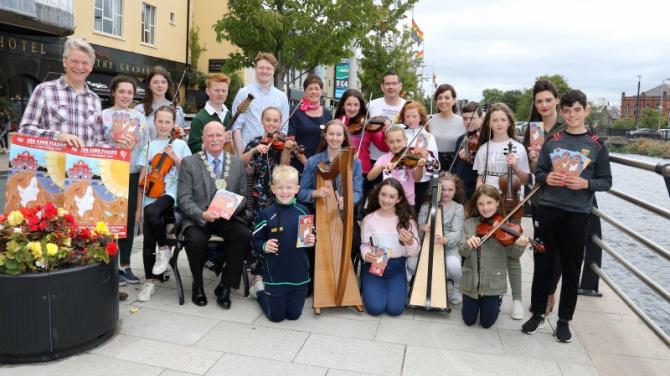 Paul Brady, Kilfenora Céilí Band – and four of Ireland’s most enduring comedy acts – will take part in the Fleadh from 5th-8th September 2019. The impressive line-up was highlighted at the Iúr Cinn Fleadh press launch on 22nd August.

In a landmark moment for this feast of sounds, popular artist Paul Brady will delight festivalgoers with material from a stunning repertoire. The 13-piece Kilfenora Céilí Band will represent the richness of a golden age of Irish music – their current line-up is the latest expression of a 110-year-old phenomenon from County Clare. A tour de force of comedy will open the Fleadh with a smile. George Jones, May McFettridge, Jimmy Cricket and Gene Fitzpatrick will present You Must Be Joking.

A special event is Call The Musician: Healing People & Communities, with local singer-songwriters Tommy Sands and Finbar Magee with San Francisco’s Noctambule – Bruce Victor and Marla Fibish. Join them at Newry Library for an afternoon reflection on the healing power of music.

The Pop Up Gaeltacht on a double decker bus in Marcus Square offers a chance to brush up on Irish language with Linda Ervine and Gaeláras Mhic Ardghail tutors. In two other events, Linda will give Irish tuition to children and speak on the hidden history of Protestants and the Irish language. The Old Newry Society will perform time-travel with an evening of reminiscing and seeing the city as it was in the 1920s and beyond.

Committee member Clive Price said, ‘We want to give a big “thank-you” to all our sponsors – including Newry, Mourne and Down District Council, Newry BID, Enterprise, Newry.ie, Buttercrane, Canal Court, SocialClix.Biz, NetCare and Bellinis. We also very much appreciate all the city venues hosting the Fleadh artists’. Many events are free, but some require a purchased ticket from Sean Hollywood Arts Centre, Buttercrane or http://www.iurcinnfleadh.com. Pick up an Event Guide from coffee houses, shops, cafes, bars and restaurants around the city.