Ritchie steps aside to take seat in House of Lords 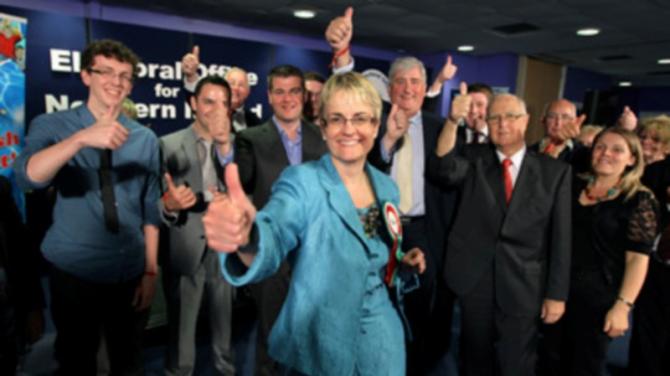 FORMER SDLP Leader and South Down MP Margaret Ritchie has left the party to take her seat in the House of Lords.

Ms Ritchie has said she remains “SDLP to the core” despite the fact she has had to quit the party to become a peer.

Ms Ritchie was leader of the SDLP between 2010 and 2011 and received a non-affiliated peerage in Theresa May’s resignation honours list.

Former UUP deputy leader Lord Kilclooney, a non-party cross bencher said: “I welcome the elevation of Margaret Ritchie to the House of Lords.

“Of course she is a united Irelander and so I fundamentally disagree with her.

“However when I was MP for Strangford I experienced at first hand how hard she worked as a public representative. Margaret’s arrival in the Upper House of Parliament can only be to the advantage of people right across Northern Ireland.”

Ritchie is a graduate of Queen's University, Belfast and served as parliamentary assistant to Eddie McGrady MP from 1987 to 2003.

She has also served as International Secretary of the SDLP and as an alternate member of the European Committee of the Regions.

She became the leader of the SDLP, succeeding Mark Durkan on 7 February 2010, and was elected MP for South Down on 6 May 2010.

On Remembrance Day 2010, Ritchie made history by becoming the first leader of a nationalist party to wear a remembrance poppy.

She wore it at the wreath-laying ceremony at the cenotaph in Downpatrick.

In December 2010 she launched a verbal attack on Sinn Féin by urging voters in the Republic of Ireland not to vote for Sinn Féin in the next Irish general election describing their politics as 'sectarian' and causing 'division'.

In the 2011 Northern Ireland Assembly election, the SDLP lost two seats and saw its vote decline by 1%. On 27 July 2011 it was reported that she faced a leadership challenge from deputy leader Patsy McGlone.

She stepped down as leader in November 2011.

The SDLP, which is opposed to members sitting in an unelected chamber, wished the former South Down MP well for the future.

“While we fundamentally disagree with the decision to take a seat in the House of Lords, we want to thank Margaret Ritchie for her long and faithful service to the SDLP and to Ireland,” a spokesperson said .

“We have received and accepted Margaret’s resignation from the party and we wish her well.”

The spokesman added that the party refused to make nominations when asked earlier this year.

“The SDLP was approached over the summer to make nominations to the House of Lords.

“In line with our long-standing policy, the party refused to make a nomination.”

Ms Ritchie explained her decision to accept the peerage to BBC News saying she always had been "of the firm belief that you should take seats wherever those seats in chambers present themselves".

She said she realised the SDLP had a policy of not taking seats in the House of Lords, but saw this as "an opportunity to articulate those viewpoints that sadly are missing at the moment".

"We have a party that sits outside the House of Commons being interviewed on the green but not in the chamber doing the work where it counts, and also the DUP who don't represent the 56% of the population [in Northern Ireland] who voted to remain," she said.

"Obviously I had to step aside from the party so as not to present them with a further management difficulty.

"I was quite happy to do that, but I'm SDLP to the core, to my very fingertips, and I will always express those views in a very forthright manner."

Ms Ritchie was elected MP for South Down in May 2010, succeeding Eddie McGrady, but lost her seat in 2017 to Sinn Féin's Chris Hazzard.

She follows in the footsteps of another former SDLP leader Gerry Fitt in taking up a seat in the House of Lords.