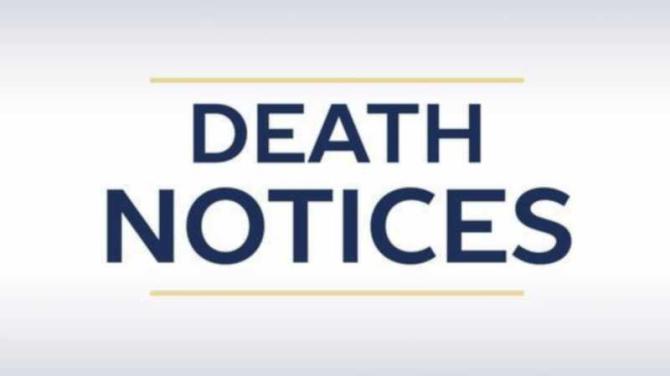 Much loved husband of the late Anne, he was the loving father of Paul, Anthony, Conor, Declan, Aine and Rosin.

Sorrow has been occasioned with the passing of Ellen O’Neill, Castlewwellan and formerly of Ballylough.

Requiem Mass was celebrated on Thursday in St Malachy’s Church.

Burial followed in the family burial ground in Aughlisnafin.

The death took place on September 16 of Hugh Paul, MBE.

He passed away at Greenvale Nursing Home after a long illness.

Husband of the late Mary, he was the loving father of Anne, Patrick, Kieran, Christine, Lucia, Martin and Bernadette.

Requiem Mass was celebrated in the Church of Our Lady of the Assumption, Newcastle.

Wife of the late Billy, she was the much loved mother of Jean, Mary, William and Alma, and loving sister to Martha.

Her funeral service took place in Down Parish Church.

Burial followed in the adjoining churchyard.

Much loved husband of Mary, the deceased was the loving father of Patricia, Maura, Christina, Kevin, Finola., Collette and Fiona.

His funeral took place on Friday from his late residence to St Colman’s Church, Massforth.

Regret has been occasioned with the sudden passing of Clare Fisher, late of Warrenpoint.

Loving daughter of John and Margaret Fisher, she the much loved sister of Siobhan, Celine and Sinead (Summerhill, Warrenpoint).

Beloved husband of Eithne, he was the son of the late James and Christina Malone (Cooley).

The deceased was the loving father of Sinead, Nuala, Ciara and Claire. Requiem Mass was celebrated on Friday in St Colman’s Cathedral.

Beloved husband of Bridgeen, the deceased was the much loved father of Anthony.

Regret has been occasioned with the passing of Adrian Feenan, late of Bessbrook.

Loving partner of the late Sonya, the deceased was the devoted father of Gavin and Morgan.

Son of Michael and the late Ann, the deceased was the cherisghed brother of Barry, Cathy, Connor and Lindsey, and stepfather of Dean and Shannon.

Husband of Clare, he was the loving father of Anthony, Anne and Conor.

Beloved wife of the late Alan, she was the much loved mother of Teresa and Kieran.

Requiem Mass was celebrated yesterday, Monday, in the Church of the Sacred Heart, Cloghogue.

Wife of the late Albert, her passing is mourned by her children Catriona and Kieran, and large family circle.

Requiem Mass will take place today, Tuesday, from her late residence for 11.00am RequiemMass in St Colmans Church, Massforth.

Burial will take place in the adjoining cemetery.