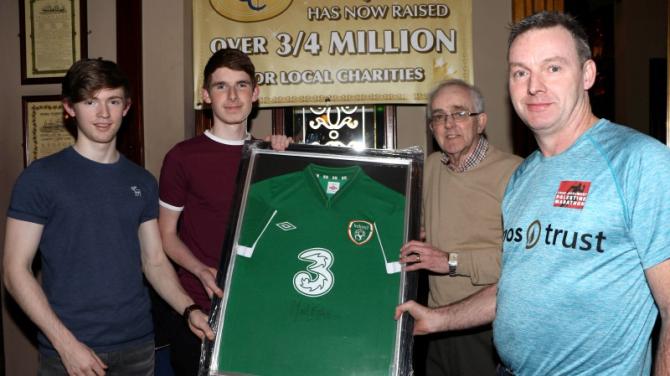 SINCE starting for an initial trial run back in 2006, the weekly quiz in the Canal Court has become something of an institution.

From its humble beginnings, in the intervening thirteen years the weekly quiz curated by Newry's pre-eminent quiz-maestro Aidan O'Rourke each Thursday night has raised almost £1million(and counting), and helped a plethora of charities both near and far in the process.

The quiz was started by Aidan, his son Vincent and family friend John-Paul O'Hare after the hotel's owner John McParland asked the former Abbey Grammar School teacher if he'd like to try it out

“John McParland asked me if I'd try it out for a month, and 12 years later we're still here and near the million mark,” said Aidan.

“We're not too far away and I'd say that sometime towards February we'll be close to hitting it.”

Such is the quiz's popularity, which is a staple of the hotel's Thursday night entertainment roster, that the charities who now approach Aidan usually find that there's a waiting list to become involved!

They say that teamwork makes the dream work, and each week Aidan is gamely helped by a rotational squadron of past and present Abbey pupils, most of whom dutifully come home from university every week to help organise the quiz.

“I enjoy it and I have good helpers – some past and present pupils of the Abbey, I couldn't do it without the boys though. I have Ryan Dineen, Michael McKeown, Noel Keough, Cillian Quinn, Calvin Kenny and Liam Brown who help me at the minute, but I've had about 14 boys who've helped me down the years. I do the questions but the boys would do the picture round and the music round.” he said.

Reflecting on some of his most memorable nights he has been involved with, Aidan said:

“The biggest night I had was the night we had for Kevin Bell, we raised £45,000 that night, and of course Colin and Eithne then had money left over and they decided to try and help other families who would suffer what they have suffered, and try and alleviate the problem of organising everything, so that's why they set up the Kevin Bell Repatriation Trust(KBRT)

“Another really big night, where we raised nearly £20,000, was in memory of Oisin McGuinness, a boy who dropped dead playing football in Derryleckeagh. And from the money that was raised the family got some defibrillators put into local schools.

The former English teacher said he derives a sense of pride and fulfilment from the profound impact that a simple concept such as a weekly battle of wits has had.

“There is a great pride and a sense of fulfilment in doing it really. I've learnt a hell of lot through being involved with the quiz and doing different charities each week. It opens your eyes and every cause has its merits.

“It's got to the stage where people ring the Canal Court and ask for my number and I'll book them in whenever I'm free..”

Louise Young, Manager of the Canal Court Hotel, said that hotel were proud to lend their support to the quiz:

“We are delighted to be able to host the quiz here in the hotel and it did come about from the friendship of Aidan O'Rourke and John [McParland, owner of the Canal Court].

“They thought that they would trial it for six months and see how it went on, and obviously thirteen years later it's still going strong and it will be almost £1million very soon.”

“Aidan would be well-known in this area, he was a teacher in the Abbey, and a lot of the boys from the Abbey would still come and help him.

“They actually come from Belfast, stay over at home and go back to university on a weekly basis, so there's real dedication as well from the locals to make sure that it works.

“It's a different charity each week and obviously on a weekly basis we sometimes have one or two quizzes.

“We've had one for the Kevin Bell Repatriation Fund that made around £45,000, we've had a night for Oisin Magennis, who was a local and who passed away very suddenly at a young age, it made £19,000, and one of former employees, Kelly Hadden, who passed away, a quiz in her memory made £6,000, so we are delighted to be part of all of this.

“I know Aidan does take the bookings and I know that he's actually booked out until after Christmas,”said Louise.