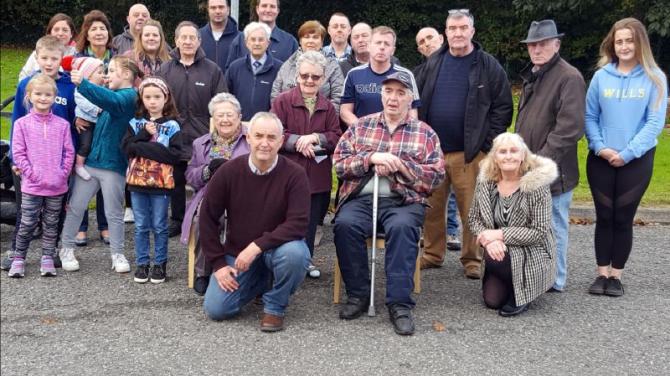 A NEWRY Community Activist and Drumgullion Avenue resident John McCabe along with local residents have for the second time in three years taken assertive opposition measures to halt plans to have a route running through their community to facilitate a planned new housing development.

A hastily arranged meeting ) which Councillors Gavin Malone, and Michael Savage attended giving what Mr McCabe claimed was "flawed communications and a failure to encompass a full community" in relation to a notification letter from the district council planning office.

The letter was in relation to amendment plans to construct 27 new dwellings on land North of a Public Right of Way historic Hickey's Lane which would witness a new planned route coming off the Armagh Road through Drumgullion Avenue past the already congested Lisgullion Park junction, and turning down a hill cutting across Hickey's Lane.

Mr McCabe revealed that at the meeting he was tasked to compile text, prioritise concerns and issues and print information leaflets and individual petiton letters all which was done the following morning.

Mr. McCabe went on to explain the background to the revisited campaign and the urgency behind it stating "In 2016 residents of Drumgullion Avenue and Lisgullion Park overwhelmingly rose up in opposition to this development not because of providing much needed housing because we all aware of the dire need for such accommodation but its the inconsiderate route which is proposed riding coaches and horses through a peaceful settled community.

"The notification letter about the amended plans dated October 8th invited any relevant comments from residents which had to be submitted by October 22nd which is the two week standard procedure. However the letter was vague in design and did not supply a contact name nor a e-mail contact address to register opposition and complaints. It also was mailed out in a afternoon post amongst junk mail and addressed to 'The Owner/Occupier' and in many cases it was overlooked. It also was not mailed out to all residents living in the immediate vicinity of the proposed route nor to all residents of Drumgullion and Lisgullion which will suffer from traffic problems and security aspects to these plans.

"Giving these flaws in communication and a failure to include all we took immediate action to inform and empower people once again in their opposition. Its well for the councils planning to state that the amended plans (which are of no interest to our community its the route which we are opposed to) are online on a public access site to view when a significant number of residents have not been informed of this with their inability to notify people to look in the first place having received no letters."

Also opening up of Hickey's Lane already identified as a anti-social region which necessitated it in the past being fenced off to protect residents is now to become completely opened to facilitate this access route.

This will ultimately lead to increased crime (having had two cars in the past burnt out at this location) whilst also serving to greatly increase pedestrian traffic not only to the new proposed development but as the main pedestrian conduit from the Armagh Road to the Newry Canal Towpath."

Mr. McCabe concluded this renewed campaign will draw upon advice received via social media from our good neighbours at Shandon Park and residents of St Clare's/ St Patrick's Ave of how the people can be duped and whilst we welcome support from all elected representatives and concerned bodies the campaign of the Lisdrum Concerned Residents will be lead from the community at all levels."