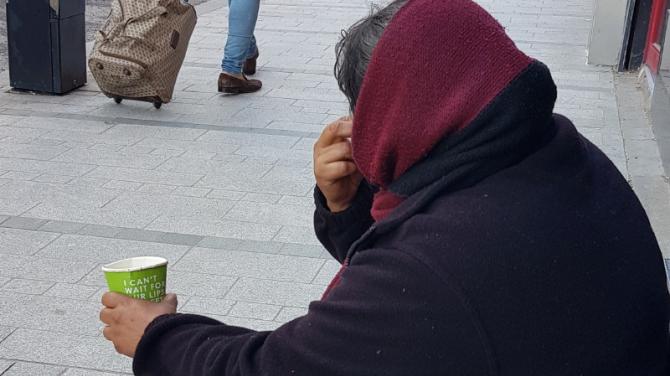 POLICE officers are fully trained and briefed on how to deal with street begging in Newry.

THE issue of on-street begging in Newry City has again come to the fore.

Local people and businesses have raised concerns about the instances of begging and the apparent rise of the problem.

Inspector Russell Vogan from the PSNI told the Newry Democrat it is a serious problem:

“It is not something that is totally out of control, but there are a number of issues around it.

“People can be something in between completely homeless if you like - and we have things like sofa-surfing.”

He did say there is an exploitative aspect to it as well:

“There is an organized begging culture, not just in Newry, but throughout Northern Ireland.

“We have made a couple of big arrests in terms of disrupting it, but Police action alone cannot help this.

“We’ve been working with other agencies such as Newry BID, the Northern Ireland Housing Executive and the Newry, Mourne and Down Council.

“There are a lot of beggers on the streets at times, and if they are not E.U. residents it becomes more difficult to re-house them.”

Inspector Vogan added that whilst Newry is not a particular concern in terms of the strength of the begging problem, officers in the city are fully briefed and trained.

“We were concerned however about the level of begging in Hill Street,” continued Inspector Vogan.

“Let’s not forget, it is illegal to beg on the street.

“We can arrest and fine people for it.

“Where those people on the street are vulnerable, we work to keep them safe.

“But it cannot be ignored or forgotten, that begging is a criminal offence.”

He also added that the wider community has its own role to play:

“I would encourage anyone with concerns over begging to report them to us.

“We need to catch beggars at the time.

“Often we get reports of people begging in a certain spot, 15 minutes prior, but we need to catch them at the time.

“It is not a problem that’s out of control, but we need the public’s help in dealing with it too.