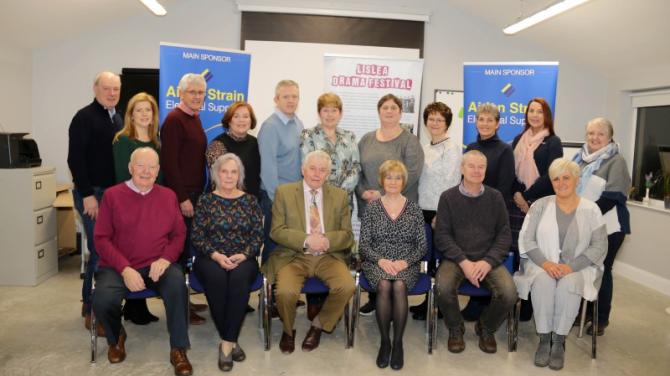 On Saturday 1st February, the Lislea Drama Festival Committee was very pleased to launch the 39th Lislea Drama Festival in The Old School House Theatre with a very special sell out final production of the critically acclaimed Lislea Does Calendar Bits n Bobs which fundraised £10,000 for Southern Area Hospice before Christmas.

The festival committee is delighted to welcome Aidan Strain Electrical Engineering, Mullaghbawn, back as our main sponsor as Aidan is a longstanding patron and friend of our festival. With his backing, and the support of all our many great sponsors, the Lislea Drama Festival continues to flourish. Aengus Hannaway Chairperson of the Lislea Drama Festival Committee extended a special word of thanks to Aidan and his family for continuing to lend this much needed support to the festival.

The 39th Lislea Drama Festival Committee are delighted to announce that the 2020 Festival programme is complete and promises seven captivating nights of drama. The 39th festival programme invites patrons to see mouthwatering productions from Ulster, Leinster and Connaught. Festival newcomers Enniskillen Theatre Company hail from Co. Fermanagh. As always there will be productions from festival stalwarts Pomeroy Players, Co. Tyrone , Glenamaddy Players, Co. Galway, Clanabogan Drama Circle, Co. Tyrone and a welcome return of Sillan Players, Co. Cavan and Duleek Drama Players, Co. Meath. The announcement of Martin Maguire as adjudicator has created great anticipation in drama circles and we in Lislea are keen to hear his profesional critique.

Lislea Dramatic Players are fresh from having a very successful year with their award winning production of ‘Castles in the Air’ by Martin Lynch directed by John Campbell having won many festivals and awards along the way. This award winning troupe will present ‘One Flew Over the Cuckoo’s Nest’ by Dale Wasserman from the novel by Ken Kesey and directed by John Campbell on Wednesday 26th February. Patrons will get a chance to preview the production on Sunday 16th February in the Old School House Theatre at 8pm. This play centres on McMurphy, a charming rogue who contrived to serve his custodial sentence in a mental institution instead of a prison. He forms surprising bonds of affection with the resident inmates and spurred by a desire for social justice, stages a revolt so they might watch the World Series, and arranges a rollicking midnight party with girls and alcohol. But Nurse Ratched knows exactly what treatment she needs to dispense for life to settle down again. Please note that this production is rated 15.

The festival will conclude on Saturday 7th March, with adjudication by Mr Martin Maguire. Patrons will be pleased to note that Season Tickets will go on sale on Saturday 8th February from 3-5pm in The Old School House Theatre, Lislea priced at £35. Tickets will also be available on the night at the Box Office from 7-8pm. Nightly Admission: Adults £7 Children £3. General Inquiries Tel: 02830838565. Ticket bookings 02830830069. See our website for Festival Programme at www.lisleacommunitycentre.com and local press for further details. Find us on Facebook and follow us on Twitter @LisleaDramaFest