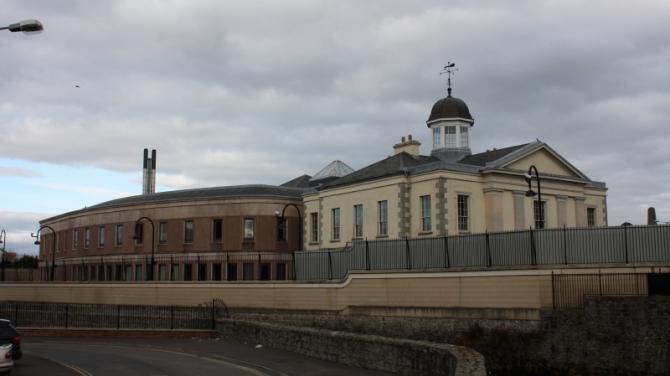 A ‘PROLIFIC’ Newry burglar who went on an overnight drunken crime spree and finally caught after he “broke in for breakfast” to a supported living home has been jailed for 30 months.

The one man crime spree witnessed numerous jewellery and cash burglaries and an attempt to evade capture by ramming into an Audi with a stolen Nissan Qashqai SUV before crashing into a wall.

Newry crown court heard that victims in the case had been left with life affecting trauma, with one couple feeling forced out of their own home with the “female afraid to be on her own”. Others were left with vehicles written off and repair costs to their property in the hundreds of pounds.

A charge of resisting police and being equipped for burglary were left on the books.

Newry crown court heard that the intoxicated defendant, a “prolific burglar” with almost 30 previous thefts and burglaries, went on burglary rampage in the early hours of the morning in question across the city including Patrick Street, Hospital Road and Rock Close.

Items of jewellery, bank cards, car keys, tools, a sports bag and even food from a fridge were stolen by the accused as well as a Nissan Qashqai car.

The PSNI was alerted to the Hospital Road when a 74-year-old resident of a home on the Hospital Road, was awoken by McDonagh breaking in to his garage. A window was broken and tools stolen with other tools strewn across his garden

The home owner went downstairs and found the patio and front doors open.

Two blood stains were found at the scene giving a “full DNA profile” of McDonagh.

Nearby, a Mazda M6 was found to have been broken into and a sports bag taken. The car was said to have been written off with loses of £1k.

Residents of a property in Rock Close later observed McDonagh getting into their Nissan Qashqai and driving off with another break-in taking place in the area with amounts of jewellery, bank cards and keys stolen.

CCTV was used to track down the vehicle which was observed driving through Dominic Street and on to the Dublin Road.

The Nissan later turned up on the Hospital Road.

The driver of a black Audi attempted to block McDonagh.

However, McDonagh rammed the car before taking action to avoid an oncoming Citroen Berlingo van and smashing into a wall.

McDonagh fled the scene on foot through John Martin Gardens to break into another address at Glanree House, Patrick Street where prosecution stated “he must have stopped for breakfast” and raided a fridge of its contents and ate it. The drunk burglar was later located and arrested.

During police interview he admitted all the offences apart from burglaries on the Hospital Road saying “I can’t remember them, but they were probably me.”

The PSNI investigating officer told the prosecution services that McDonagh was “one of the most co-operative they had ever interviewed”.

Defence said that his client had taken voluntary action to address his issues with “dependency” whilst on remand since last June.

“This is the line in the sand,” said defence.

“He was almost glad to have been caught and remanded, and the lack of a bail application would verify this, having been on remand this last six months.

“The sad reality is that many go to jail to dry out.

“A substance test from November shows that he has stayed off drugs and alcohol.

“The mitigation is the stupidity of the enterprise with the added volition to address his problems without any court direction,” added the barrister.

His Honour Judge Gordon Kerr alluded to the offending as a “series of drunken interconnected offences” leaving victims with life-long trauma in his wake.

“He must go to prison, the question is for how long?” said Judge Kerr.

A pre-sentence report showed McDonagh to be a man with “serious drink issues”, who was voluntarily taking steps to address his addiction, though his alcohol consumption was not a mitigating factor.

“You are seen as a high risk of re-offending, but not as a risk to the community.

“Allowing for time served, effectively one year, one could consider the sentencing that I will pass of 30 months as a lenient one,” added His Honour.