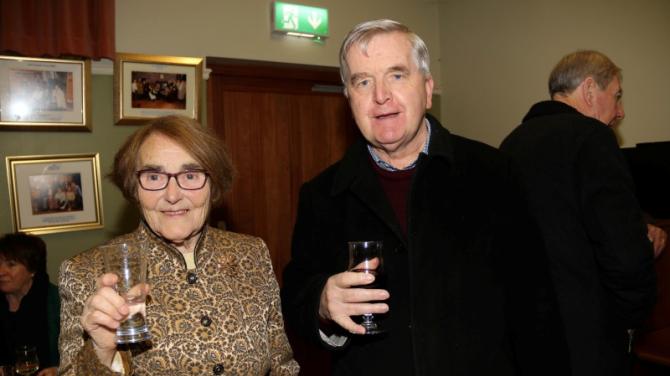 He paid tribute to the sponsors without whom the festival would not exist. Aidan Strain Electrical Engineering was thanked for continuing to be the festival main sponsor. He also gave a warm welcome to Mr Martin Maguire the festival adjudicator and looked forward to hearing his professional critique. He welcomed Clanabogan Drama Circle, Co. Tyrone and their portrayal of “The Two Loves of Gabriel Foley” by Jimmy Keary and directed by Emma Pearson that gave an eagerly awaited performance and one which didn’t disappoint.

The wet and windy weather did not deter the festival patrons arriving early, as season ticket holders and sponsors enjoyed a wine and canapé reception before the evening’s performance. As the audience settled into their seats, a second treat was served up by Clanabogan themselves with their “energetic, entertaining and ultimately credible” comic production of a plot that “had more holes than a string vest,” according to festival adjudicator Martin Maguire. The play centred on the haphazard love life of “Gullible Gabriel,” who joins a drama group because he is infatuated with leading lady Hazel, but long suffering neighbour Chrissie who secretly pines for Gabriel is not going to give him up without a fight. Add in an Irish mammy, an aunt who sucks lemons and an interfering friend, and you have the perfect recipe for a farcical love story which is typical of the rural comedy genre.

Clanabogan Drama Circle were praised for their purposeful set, the thoughtful music that plotted each turn of events and their excellent costumes, particularly Gabriel’s “appalling shirt” and Chrissie’s “wow moment” when she entered in her evening dress. Martin Maguire expressed admiration for their “brilliant comic physicality” which he acknowledged was due to repeated rehearsal and thanked the director for not settling for anything less. However, he voiced the audience ‘s thoughts when he concluded that the night belonged to the “gorgeous characterisation” of acid tongued Aunt Lucy with her spectacular fainting, executed to perfection every time by Dympna Slevin – and warned everyone of a certain age not to try it at home!

On Sunday, Lislea welcomed back Enniskillen Theatre Company, Co. Fermanagh with “The Night Alive” by Conor McPherson. This play quietly celebrated the unassuming heroisms of everyday life against the corrosive pain of loneliness and was very well received by patrons and completed a very successful first weekend of theatre.

On Wednesday 26th February it is the turn of Lislea Dramatic Players with their production of “One Flew Over the Cuckoo’s Nest” by Dale Wasserman from the novel by Ken Kesey (rated 15). This play has emerged from the cult classic novel and made its premier in New York 1963. This is a tale of a charming rogue McMurphy who contrives to serve his custodial sentence in a mental institution instead of a prison. He forms surprising bonds of affection with the resident inmates and spurred by a desire for social justice, stages a revolt so they might watch the World Series, and arranges a rollicking midnight party with girls and alcohol. But Nurse Ratched knows exactly what treatment she needs to dispense for life to settle down again. This play, carefully crafted by director John Campbell tells a tale of optimism amidst a sea of hopelessness. This is a fine production from Lislea Dramatic Players astutely written by Ken Kesey, reeking of bitterness occasionally leavened by black humour.

On Saturday 29th February it is the turn of festival stalwarts Pomeroy Players, Co. Tyrone with “Same Old Moon” by Geraldine Aron. This is a charming autobiographical play from the life of an aspiring writer Brenda Barnes as seen through the eyes of her eccentric and fiery family. Hilarious scrapes erupt when Brenda’s imagination and intelligence bump against the restrictions of Irish and English customs and society. This play takes a captivating and entertaining look at family life. Perfect Saturday night viewing.

Duleek Drama Players, Co. Meath make their eagarly awaited performance in The Old Schoolhouse Theatre, Lislea on Sunday 1st March with Michael Ferguson’s “The Blacksmith”. When a Hollywood film company decides to use Bill Smith’s humble forge in their new blockbuster, a magical comedy unfolds with an entertaining romp through the folk traditions of 1940’s rural Ireland. But as curious locals await the arrival of the film crew, all is not as it seems. Written and directed by Duleek playwright Michael Ferguson “The Blacksmith” is based on the folklore of his native Cooley Peninsula and the colourful characters he knew.