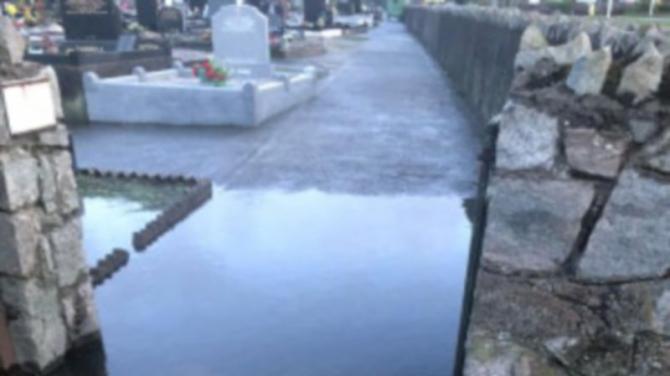 MOURNERS at a Newry city graveyard have said they are ‘heartbroken’ at damage caused to their loved ones’ final resting places by the wet weather.

St Mary’s Graveyard, on the Warrenpoint Road in Newry was hit by the recent bad weather, with parts of the cemetery left flooded.

The consecrated ground resembled more of a swimming pool in the aftermath of Storm Dennis.

Families were left with the arduous task of having to remove the water from graves belonging to their loved ones.

Independent Councillor Gavin Malone said that the flooding issue in the graveyard has been on-going for some years now:

“I was speaking to the clergy last weekend about the problems.

“There have been new pipes put down in recent times to help alleviate a problem, that is not a new one.

“This graveyard has, unfortunately suffered from this for many years“.

One mourner, told the Newry Democrat that she had just buried her father a number of weeks ago, adding that she and the family are ‘heartbroken’ at the damage that has been caused to their plot.

“I think to be honest, it is more a lack of investment, and drainage installed into the cemetery,” they said.

“This has been a problem in this cemetery for a long time - many years, and still nothing has been done.

“My dad was buried there only five weeks ago and we are traumatised that daddy is buried in a bog of water.

“We were told prior to buying this plot that drainage had been sorted and we have been misled.

“We are obviously, very upset as a family.”

“We have been getting work done on the graveyard site since before Christmas.

“There is one more session of that planned, but the problem we have been having has been made worse by the wet weather, with the ground not firm enough to take it.

“The water is running into the graveyard from more than one direction, which is not helping us either.

“We will be getting the problem fixed as soon as we can.

“I have every sympathy with the upset being caused to mourners. I have spoken to some in relation to it; I feel we will get the problem resolved sooner rather than later,” he added.