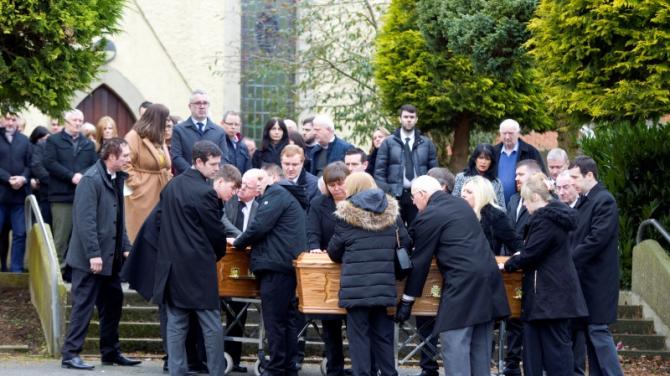 THE family of a Newry man killed in a collision in the Republic of Ireland, that also claimed the lives of two others must cherish their memories of their loved one, a funeral has heard.

He was killed in a crash in Dundalk, County Louth, that also saw mother and son Mary and Kevin Faxton from Bessbrook die on Saturday 29th February.

Mrs Faxton, who was in her 80s, and her son Kevin, who was in his 50s were buried following Requiem Mass in the Church of St Peter and St Paul, Bessbrook.

Ft Desmond Loughran told the hundreds of gathered at Mr Magill’s funeral service that the road victims had all had their lives taken in just seconds:

He added no one could ever have foreseen the tragic events that would bring them together in the Cathedral:

“This event was never to be a part of our life’s plan in any shape or form.

“Sadly so, this event came out of the blue, and all too quickly for someone oh so young,” he said.

The Priest told Mr Magill’s loved ones that he could not even begin to imagine the ‘depth of pain and sorrow’ they were feeling:

“It was in the blink of an eye that we were robbed of a young man who was a son, a brother, a mate, and a friend.

“Very sadly so, Mary and Kevin Faxton and Bryan Magill lost their lives to this horrific road crash.

“Three lives ended, over in seconds.”

“All we can do now is keep the memories of Bryan that we have in our hearts and our minds.

“All the bits and pieces of Bryan that made him so special to us, go back to God with him.”

He also spoke of Mr Magill’s passion and devotion to football, a game which he also played.

“No more will we ever see him rejoice over Arsenal.

“No more will we ever meet him for a drink or a game of football,” said the Priest.

“Our role today is to say goodbye to him, and give him back to God in thanksgiving for all that he was for us and to us, a son, a brother, an uncle, a neighbour, a friend, a member of our team, a work colleague, a friend.

Mrs Faxton is survived by her husband, Kevin’s father Joseph, and their four other children, Malcolm, Carole, Yvonne and David.