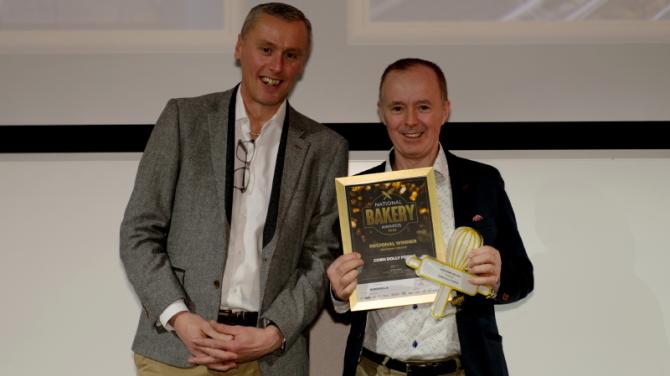 IT has been announced by the National Bakery Awards, that they have named the Corn Dolly as the best bakery in Northern Ireland.

The National Bakery Awards is an annual event organised by Bakery Business magazine. Bakeries from every county in the UK are surveyed and the winner of each county is declared from both retail and wholesale. Each entry from a county is weighed, measured and debated at length by a team of leading industry experts.

One of the successful county winners recognised by the National Bakery Awards this year was the Newry & Mourne bakery Corn Dolly Foods for County Down, a fantastic achievement in itself.

However, it didn’t end there for the Corn Dolly as they had an opportunity to become a Regional Winner. The county winners from each region of the UK are invited out to the awards ceremony, held at Euston Square in London. These winners then get the opportunity to find out there and then if they are also declared the best bakery in their region.

The event took place last Wednesday (11th March), with representatives of bakeries and suppliers from all over the UK making the trip out to celebrate the best in baking. One of Britain’s more versatile presenters Mark Durden-Smith, an anchor on Aviva Premiership Rugby, hosted the evening. It was at the awards ceremony that the Corn Dolly was named winner of the Northern Ireland region and recognised for their use of quality ingredients and service to the local community.

On hearing the news about their achievement Anthony O’Keefe, Director and co-founder of the Corn Dolly, had said: “We were astonished at being named best in our County, but to be named best in our region massively exceeded our expectations. Excellence has certainly been something we strive for, but to be officially recognised for our efforts in baking with a lot of excellent competition around us is more than welcome.”

The Corn Dolly has earned this award during their 30th anniversary of providing a large selection of traditional & artisan breads, hand-made confectionary and celebration cakes to the local people around Newry and Mourne

These awards are a fabulous addition to their already extensive awards list which also includes: Great Taste Awards, Tiptree World Bread Awards, Bridgestone Guide Awards and Blas na hÉireann awards. You can find more about Corn Dolly Foods on https://corndollyfoods.com/ or follow them on Facebook, Instagram and Twitter.