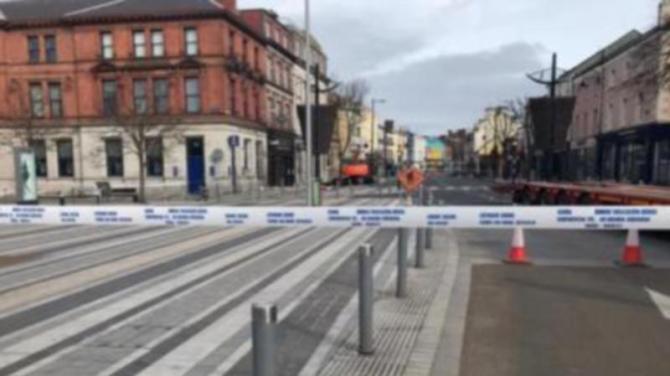 Two men have been refused bail n charges linked to the theft of ATM machines containing 240,000 Euro in what a judge described as “almost a military operation” .

Fergal Nolan(24) of Bawns Road and Michael Muckian (29) of Crave Road both Silverbridge, were arrested after Gardai alerted PSNI to the robbery, and advised having made off were heading for the border.

Nolan appeared by a live link facility from Lurgan PSNI Station but Muckian is being held at Musgrave Street Station as he is said to be showing symptoms of Covid-19.

They by a live-link facility at which is the current method of dealing with cases due to coronavirus restrictions.

Both men are charged with handling goods knowing they had been stolen in the Republic of Ireland.

A detective constable told the Craigavon Magistrates Court all charges could be connected.

It was explained the two cash machines were stolen from banks at Main Street, Dundalk in the early hours of 4 April.

A few days earlier, three vehicles – a Ford Transit van, a Volkswagen Golf and a Mercedes - were stolen from a property in Monaghan during a creeper burglary.

The following day a trailer was stolen from premises in Castleblaney.

Shortly after 3am on Saturday morning two of the stolen vehicles were set alight at the exits of Dundalk Garda Station.

Officers then picked up the incident underway at the banks by CCTV in which a lorry and digger were on the street. A sophisticated operation was underway and it appeared those involved, all of whom were masked, were communicating by walkie-talkie devices.

The lorry proceeded to block the road before the digger smashed into the banks, removed the machines and placed them the trailer which was attached to another Volkswagen vehicle.

The stolen Mercedes was also spotted by Garda on arrival, which made off, and was unable to be traced.

The Volkswagen towing the trailer also fled from the scene.

A high-speed pursuit followed involving Garda Air Support helicopter and the Armed Support Unit, as well as squad cars, two of which ended up damaged.

PSNI took over when the vehicle crossed the border at Jonesborough.

The helicopter as able to monitor the vehicle which, although lost from view for a short time when it apparently off-loaded the trailer, the Volkswagen was then picked-up arriving at Muckian’s home,

The two men entered and when later arrested there by PSNI, smouldering remains of what are believed to be communication devices were discovered near the house.

The trailer and cash machine were later discovered abandoned in Forkhill area of County Armagh.

It was disclosed tactics were used to hinder Garda response to the incident, including the torching of two cars outside Dundalk police station .

Heavy plant machinery and other vehicles were noted also noted travelling slowly in convoy at the time, which Garda believe was deliberate to slow their journey to the crime scene.

A defence lawyer for both contended his respective clients’ family members are willing to put forward substantial cash sureties of £10,000 each.

He added both men are: “Wanted in the Republic of Ireland on more serious offences that these, which are not all that serious. At most it’s handling stolen property.”

District Judge Eamon King remarked: “This was almost a military operation, there are clearly other parties, and extensive planning involved. There was the obstruction of Garda and slow-moving vehicles on the road.”

He rejected bail for both men ruling there were no conditions he could impose to allay concerns around risk of reoffending or interfering with justice.

The pair will appear again by video-link on next month.