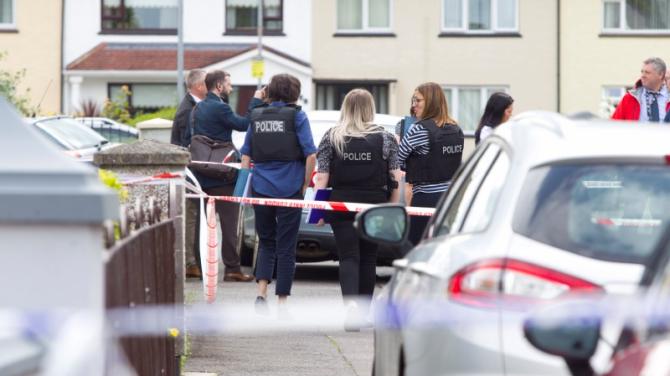 AN on the run suspect of a Newry murder was apprehended on Sunday by police using a taser after a prolonged stand-off with the male holding a knife to his own throat.

The PSNI conducted a high-level investigation in Drumalane Park in the city following the report of a deceased 20-year-old woman found lifeless in a bath at approximately 8.30am.

The body of the female is said to have been brutally beaten and strangled in what was described as a bloody murder scene. A post mortem is to be carried out to determine the cause of death.

A large presence of CID police and an ambulance attended the cul de sac with residents throughout the area coming out on to the street as the PSNI knocked on their doors.

The disturbing details of the suspected murder have left the local community shaken.

Honorary Polish Consul, Jerome Mullen confirmed that the deceased and the alleged killer are both from Poland.

“I was contacted in the morning about the deceased in order to make further contact with the family who are both Polish nationals,” said Mr Mullen.

“This is a very tragic development in Newry and my condolences go out to the family of the deceased.

“This is a rare occurrence in the polish community in Newry and is something we have not seen since the murder of Marek Muszynski in 2009.

“I will await confirmation of the names of the deceased and the suspect before making contact with the family.

“I would like to offer any assistance possible to the family of the deceased at this very tragic time, added the honorary Polish consul.

Independent Newry councillor Gavin Malone, who has family living in the area, was at the scene shortly after the body was discovered.

“I was contacted 10am on Sunday and shortly afterwards I was down at the scene, which had already been cordoned off by the police,” said Mr Malone.

“The residents had been told by the police that they were searching for an individual in connection to the death.

“I have spoken with the local residents and they are all saddened and in shock.

“This is a terribly tragic incident that has taken place in a quiet area of Newry, it is just heart-breaking,” added the councillor.