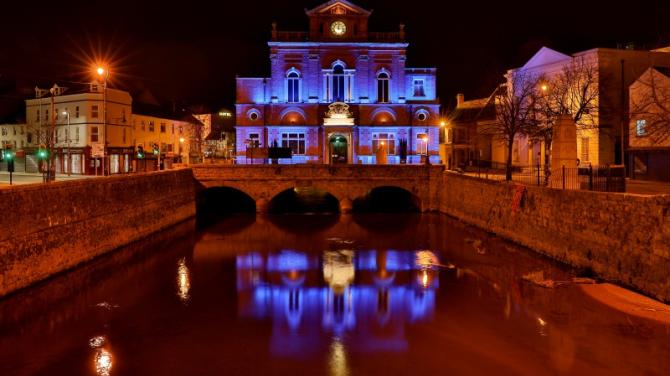 The Chairperson of Newry, Mourne and Down District Council, Councillor Laura Devlin illuminated Newry Town Hall and Down Leisure Centre Blue on Sunday night at 8pm in remembrance of Noah Donohoe who died tragically in June.

Noah’s disappearance sparked a huge community response across Northern Ireland and a ‘Remembering Noah’ campaign was started by the 14-year-old’s mother, Fiona Donohoe. This illumination will mark nine weeks since young Noah went missing and it is hoped it will help create awareness for the ongoing appeal for information surrounding his death.

Speaking about the campaign, Councillor Devlin said, “As a mother myself, I am devastated at the loss that Fiona Donohoe is going through and would like to extend my support to her and her family. The lighting of Council buildings is both to honour Noah’s memory and also to raise awareness of the continuing appeal for information. The community can further keep it in the public mind by using #remembermynoah.”

Councillor Devlin continued, “I would appeal to anyone with any evidence or information in respect of Noah’s disappearance to bring this immediately to the authorities.”