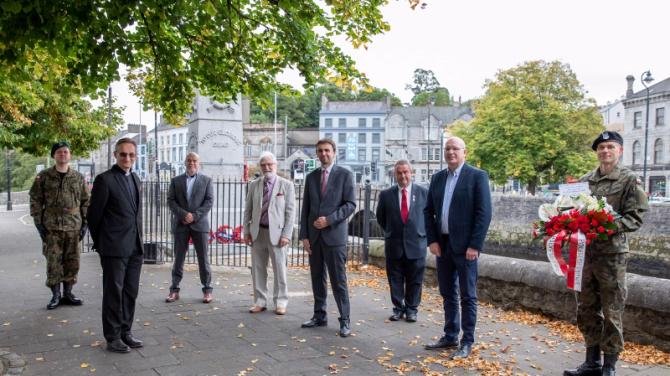 The 100th anniversary of the Battle of Warsaw has been marked in Newry with a special commemoration by the Polish Consul General Pawel Majewski.

A Polish wreath was laid at the Cenotaph on Bank Parade to commemorate the centenary of the battle which took place in 1920, just two years after the end of the Great War.

Honorary Polish Consul, Jerome Mullen, whose office is based a short distance away in Newry Town Hall, spoke of the importance of the commemoration in the border city.

“The Polish community in the greater Newry area were keen to commemorate this important event and its history,” explained Mr Mullen.

Repelling the Bolsheviks’ attack on the Polish capital from August 13 to 25, 1920 was a landmark moment for reinforcing the independent Poland as well as other, newly established national states in Central Europe.

It also averted the risk of the collapse of the Treaty of Versailles following the end of World War I and as such provided Europe with an opportunity for attempting peaceful international co-existence.

One hundred years later, Newry has marked the significant anniversary in respect of its large polish community and due to the headquarters of the honorary Polish consul being located in the city.

“Shortly after regaining its Independence in 1918, Poland had to fight for its borders during the Polish Soviet War,” explained Mr Mullen.

“In 1920 the young Polish state faced invasion by the Russian Red Army, across the Vistula River.

“The Battle of Warsaw, known also as the ‘Miracle of the Vistula’, resulted in a decisive Polish victory, forcing the Soviet Red Army to retreat back to the east.

“This brave Polish victory against a much larger Red Army has been seen historically as a particularly important battle which prevented the spread of communism into Western Europe at that time.

“The Polish victory in the Battle of Warsaw led to a peace treaty with Soviet Russia and Soviet Ukraine, which lasted until the outbreak of the Second World War and another Soviet invasion in 1939.

“In Newry there was a special Polish Mass organised in St Brigid’s Church, in the Meadow on Sunday followed by a wreath laying, reception and presentation of this historic event in the Canal Court hotel,

“It was also a great honour to have the Polish Consul General Pawel Majewski here with us today to mark this occasion, which the local Polish community are grateful for,” he added.