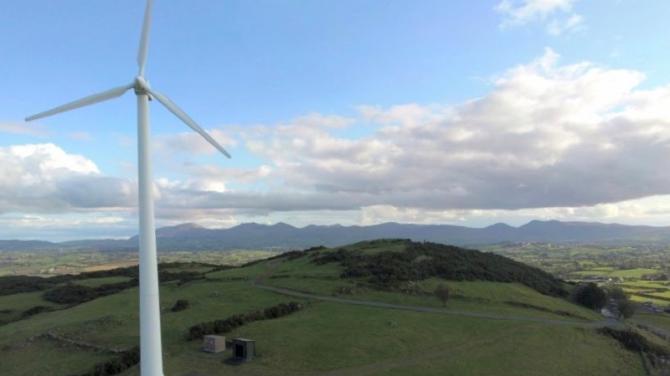 CAMPAIGN group Friends of Knockiveagh has welcomed a debate in Stormont concerning the damaging development at Knockiveagh outside Rathfriland, County Down.

The debate was secured by Ulster Unionist Assembly Member (MLA) Doug Beattie MC and highlighted the historical importance of the site. Maj Beattie gave an overview of the planning failures which allowed a wind turbine to be erected close to a Neolithic burial cairn.

The cairn, which is a scheduled monument protected by law, is thought to have been the location for the inauguration ceremonies of early Irish kings, and predates the pyramids.

Maj. Beattie acknowledged that the original procedural failure to consult with government archaeologists occurred before responsibility for planning moved to local authorities in 2015, and noted that, “We are now caught between two Departments and the Council”. Planners at the Department for Infrastructure and ABC Council were later asked by the Historic Monuments Council to revoke the planning permission, but this was not done. Maj. Beattie encouraged all parties to act to restore and protect the area for future generations and pointed out, “Decisions like this are not unusual, the destruction of our heritage is not unusual”.

Cross-party support was very strongly voiced by MLAs from the other four main parties.

Jim Wells (MLA) DUP condemned the original Planning decision and called for the removal of the turbine, and raised the issue of possible compensation: “This is such an important archaeological site that the only way I can see out of this particular difficulty is for ABC to revoke planning permission and for DfC to pay any form of compensation that is required.”

Sinéad Ennis (MLA) SF reaffirmed her committed support of the campaign, describing the development which now exceeds and breaches the original Planning approval as, “nothing short of a disgrace.” She criticised the authorities for not stepping in sooner and called on them to undo the mistakes and commit to protecting the site for future generations, she added, “Despite the multitude of failures at Knockiveagh, it is still not too late to act.”

Sinead Bradley (MLA) SDLP highlighted the national importance of the site and reminded all that Knock Iveagh, “predates many of the divisions that ever existed on this land, and we are right to all share and be passionate about its future... the story of KI sadly now has a chapter within it for our generation that we should be ashamed of.”

Andrew Muir (MLA) Alliance agreed that ABC Council alone should not be called on to pay for any associated costs. He called for a review into the current Planning system which he described as “slow and ineffective”. He stated that, “an application process that is still disputed eight years after the original decision serves nobody’s interest”.

Minister for Communities, Carál Ní Chuilín welcomed the debate and reaffirmed her commitment to visit the site at Knockiveagh. The Minister reminded Members that Departmental archaeologists had not been consulted on the turbine application, and pointed out that she does not have the power to revoke what she termed “flawed” Planning approval. Ms Ní Chuilín stressed that her Department was liaising with the Council, and continued to provide substantial expert advice to ABC Council. She stated that her Department “had been financially supporting local government prior to, and during, the pandemic, and that this support would continue.”

Friends of Knockiveagh welcomed the cross-party support and repeated their call for the authorities to discontinue the Planning permission and restore the hill. They criticised the Department for Infrastructure who is responsible for maintaining the integrity of the planning system in Northern Ireland, for also failing to take action to protect the site despite being asked to do so by the Historic Monuments Council in 2017.

It is also believed that the Knockiveagh turbine has been breaching noise regulations.

A petition signed by 43 neighbours was delivered to ABC Council who carried out a noise nuisance survey which completed in May 2019. The results of this have not yet been released to residents. However, a preliminary report conducted by ABC Environmental Health, leaked by a whistleblower, stated that residents have, “lost the amenity of their homes due to noise” and that the turbine was in breach of noise limits on several occasions during the period surveyed.

“Even though I made it known to the council that I had the leaked report and its findings, they refused to do anything to stop the turbine.

There have been many failures over Knockiveagh and this is another one to add to the list.”