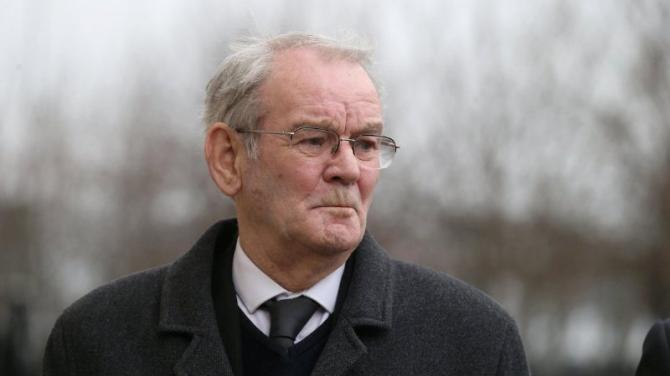 BESSBROOK man Alan Black has been awarded a MBE in the New Year’s Honours ‘for services to the community in South Armagh’.

The only survivor of the Kingsmill massacre, he was shot 18 times in that January 5, 1976 atrocity. Each of his other 10 work colleagues, all of whom were Protestants, died at the hands of an IRA gang who stopped the men’s van as they returned home from work, lined them up and gunned them down.

Although scarred physically, psychologically and emotionally by that attack, Alan – now 77 – has been a beacon of light and hope to the people of south Armagh, a fact borne out by his inspirational cross-community work.

“Bessbrook is a very mixed village and it never really lost that; Catholics and Protestants never went into ghettos, they still live side by side,” he said. “I was lucky enough to have been born here, so I always took that to be the norm.

“After Kingsmill it had the potential to go off the rails, so I and Brian Sloan, who is a Catholic, whereas I’m a Prod, decided to form a youth football club in 1979. It wasn’t to bring the kids together, it was to keep them together.”

For the following 17 years, Alan continued to work towards fulfilment of that objective before, in his words, “bowing out.” Today he is president of the club.

What began as an attempt to keep Bessbrook’s Protestant and Catholic youngsters together snowballed from one team into today’s nine, though Covid means only the Under 6s, 7s and 8s have been active this season.

“Brian’s still there,” Alan said. “He’s been at it for over 40 years now and, as chairman, he has overall control of the club. As president, I’m just a figurehead, though I keep up to date with results. But at 77, I’m not very active. Brian is, though; he really is a great bloke.”

When he was contacted, via email, to inform him of his MBE, Alan’s first reaction was to treat it as a case of somebody playing a prank. He looked at the message several times for clues as to the sender’s identity and found a London phone number.

“I phoned it and got through to a woman, who explained that she was working from home,” Alan said. “I read her the message I had received and she confirmed that it was for real.

“When I asked her how these things work – are you nominated or what? – she told me that I had been nominated four times, but she wasn’t allowed to tell me who those people were. There are a few I suspect as maybe having done it, but I don’t know.”

His response when I asked him if he had shared the news with anyone after being informed of his award was, “I told my immediate family – my daughter and two sons – but other than that, no. To tell you the truth, I was a wee bit wary about all of this. Because I was half expecting the whole thing to fall through the floor and come to nothing.

“It was only this afternoon (Wednesday, December 30), when I received formal confirmation, that I realised it wasn’t going to go through the floor. Up until then I’d been telling the family not to be making any fuss or planning any sort of celebration.”

Finally able to accept the reality of his award, Alan said, “Of course I’m glad to accept it on behalf of all the good people I have met and the people of Bessbrook – the whole community here. I’m proud of the way Bessbrook acts and does things, for there’s absolutely no sectarianism in this place.”

Then, very poignantly, he added, “I am aware that there are families still grieving after Kingsmill and I feel very much for them. I would dedicate this award to all of the people who have helped me through the years because some of them have been very difficult. I really appreciate all of the support and encouragement I have had through very difficult times; I don’t underestimate the way in which I was helped in all of that.”

Re-emphasising the depth of the relationship he has always enjoyed with Brian Sloan, Alan added, “He really is a great fella. We only met in 1978 when I came back from Scotland after Kingsmill and we have been firm friends ever since.

“When we started up, we really didn’t know how to go about running a football club. We needed somebody who had experience of doing that, so went to Don Walsh who came from a very strong football family here in Bessbrook. He came on board right away and he was a great help in the early days.

“And Artie Green was another all-round-good-guy. Brian and I went to see him and explain the project we had in mind in the hope of selling him the idea. And we did, because he managed the teams up until he was no longer fit to do it. You’re talking about a football man through and through – Newry City named their back pitch after him; that’s how highly thought of Don was there.

“Paddy Duffy is another I’d single out as a man who does a tremendous amount of work for the community. Paddy – who has just recently retired – was a Godsend to our youth football club. If there was any logistical problem, he solved it. A great help to everybody.

“Local businesses, too, were really supportive, with sponsorship of strips for example. If we had transport problems, we solved those. At the end of the day, the whole thing was a community effort.”

And the man at the heart of it? Alan Black MBE, living proof that the darkness cannot overcome the light.