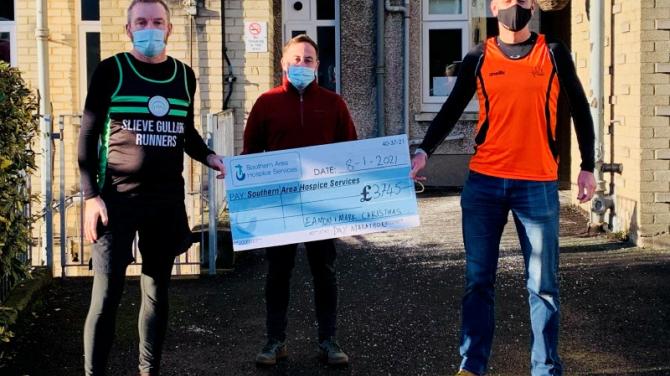 AT five o’clock on Christmas morning, at which stage the thermometer was reading an icy -4 degrees, two local men left Newry’s Hill Street for a marathon run in aid of the Southern Area Hospice Services.

The pair - Slieve Gullion Runners’ Eamon Murphy and Club Pulse Runners’ Mark Winters – were supported by family members and friends who also rose early to provide them with refreshments and vocal encouragement in the course of their 26.2 mile (42.195km) ordeal.

The intrepid duo followed the Newry Marathon route, namely along the Canal towpath to Carnbane before joining the main road to then run all the way to Scarva via Jerrettspass and Poyntzpass.

The homeward leg was run entirely along the canal towpath, returning to the finish at Hill Street from where they had set off four hours earlier.

At various points along the route they were joined by fellow running enthusiasts who also rose early in order to accompany them for a few miles, something for which Eamonn and Mark were particularly grateful.

Expressing their gratitude to anyone who enabled them to complete the December 25 challenge, the pair’s post-run statement to the Democrat read, “Our sincere appreciation to everyone who donated or supported us in any way.”

They have since presented a cheque for £3,745 to James McCafferty of the Southern Area Hospice Services.