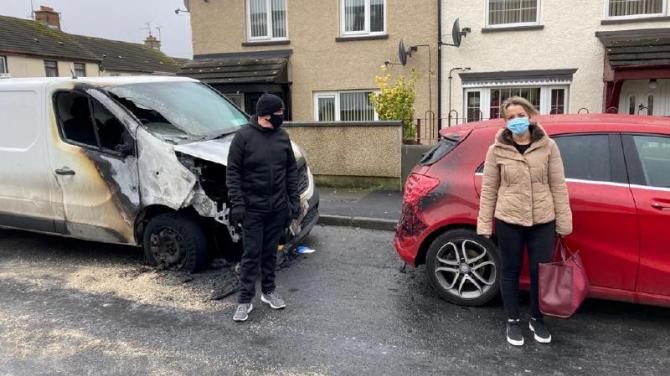 NEWRY/Armagh MLA Liz Kimmins has strongly condemned an arson attack on a number of cars in Derrybeg including the car of a heavily pregnant woman.

"This is a disgusting attack on this close knit community who are in total shock this morning.

My colleague, Cllr Charlie Casey and I, have spoken with a couple who had their car and work van burnt in this incident and were extremely shook up.

One of the victims is heavily pregnant and this has caused her and her husband huge stress.

The wider implications of this attack are the fear and anxiety caused to the victims and the Derrybeg community, as well as the negative impact on people's livelihoods”.

Condemning those involved in the incident, the MLA said,

“Over the weekend we saw the stark images which demonstrated the severe pressure our local hospital, Daisy Hill and our emergency services are under and this anti-community criminal behaviour further compounds this.

We are very lucky that no-one was seriously injured or worse in this very dangerous incident, the work van contained highly flammable products which if ignited could potentially have caused chaos”.

“The people of Derrybeg do not deserve this, and I, as the MLA for the area, condemn it in the strongest possible terms."

I have emphasised to the PSNI the need for a strong, proactive response in dealing with this and would urge anyone with any information relating to this to contact the PSNI, or alternatively your local PCSP Representative or CRJ Newry”.