Deli Lites tie up with Boots 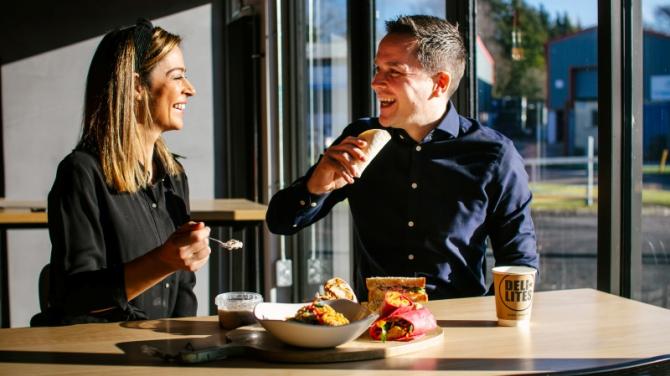 DELI LITES , the Warrenpoint based artisan food-to-go firm, has started 2021 on a high after securing a major deal to supply sandwiches to Boots stores across Northern Ireland.

The new deal builds on the Warrenpoint company’s already strong relationship with the leading pharmacy-led health and beauty retailer, with whom it has worked in the Republic of Ireland for four years.

DELI LITES, which is run by husband and wife entrepreneurs, Brian and Jackie Reid, and employs a team of almost 300 people supplies a range of products to a host of other major retailers such as Sainsbury’s, Tesco and Costa.

The business produces more than 20 million products every year, including gourmet sandwiches, nutritious salad bowls, hot sandwiches, heat-to-eat meals, award-winning bakery treats and a new chef-led vegan friendly range. As well as selling throughout the UK and Ireland it exports to a range of European and other international countries.

DELI LITES will be the first local food company to supply fresh food-to-go solutions to Boots stores in Northern Ireland, which had previously relied on GB-based suppliers.

CEO Brian Reid commented: “We have had a fantastic working relationship with Boots for four years and we are excited to now be supplying the Northern Ireland stores.

“It is an exciting opportunity for us to profile our ranges and work together on new products over the coming years.

“Given the supply chain benefits and the ‘source local’ advantage it is of mutual benefit to both companies to be working together at this time.”

The multi-award winning firm, set up by Brian and his wife Jackie in 1998, has been a huge local success story.

The company has built its reputation on quality, using only the finest ingredients from the best of Irish producers.

A team of chefs are constantly innovating with a food range which is inspired by emerging global food trends.

This innovation continued throughout the pandemic when the company also focused on strengthening its branding and ranges of products into retailers and Cafes.

In September Brian Reid was honoured in the 2020 Institute of Directors Awards when he was named International Director of the Year.