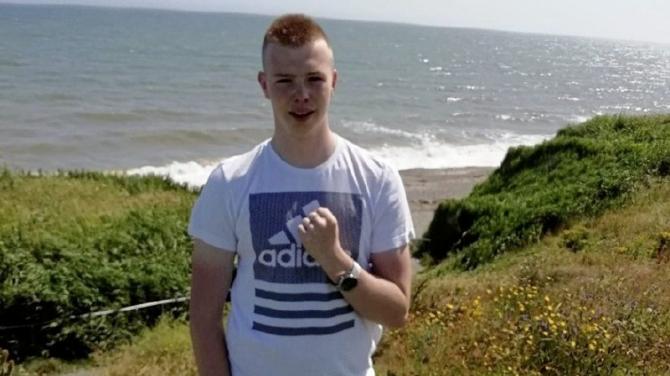 A NEWRY teenager with almost 145 previous convictions said he was spiked with an unknown drug when he flew into an aggressive rampage against police spitting blood in a constable’s face.

Michael Mynes (19) with an address of Linen Court Hostel, Armagh pleaded guilty to two counts of disorderly behaviour, six counts of assault on police and two counts of criminal damage on October 24, 2020.

The court was told that the defendant was absent from court due to recently being admitted to Blue Stone mental health unit in the last number of days.

Prosecution stated that at 12.35am on the day in question that a report was made of a male lying intoxicated on the Derrymore Road, Bessbrook.

Officers attended the scene and as they spoke to members of the public, Mynes ran off.

He returned a short time later staggering across the road with a clenched fist preparing to try to strike out at police.

Police arrested Mynes and took him toward the PSNI vehicle when the accused attempted to headbutt one officer on the face and spit in another’s.

The accused was taken to Craigavon Area Hospital in concerns of his health.

He continued to be abusive at the hospital kicking, biting and spitting out at police as well as spitting inside the PSNI cell van in an “extremely violent and aggressive manner”.

Defence barrister, Seamus Lannon said his client was currently seeking medical help and asked that the court would stay its hand so that he could progress psychologically.

“He is in deep remorse of his actions and states that he believes he was spiked with a drug that he would not usually consume,” said Mr Lannon.

District judge Eamonn King, who remarked that he had probably passed sentence on the majority of Mynes offending, quipped: “He’s consumed every drug available to him in amounts of prescription that would not be good for him.”

Defence alluded to a pre-sentence report, stating that he was canvasing its suggestions to the court.

The barrister stated that his client would not have offending in such a way had he been on his normal type of drug or even sober.

“There is significant help required for him,” said Mr Lannon.

“His behaviour at the time was disgraceful.

“I ask that the court deals with him so not to take away his liberty,” he added.

The magistrate highlighted some of the court’s concerns.

“If the court was to be cynical, he could have signed himself into Blue Stone to avoid the consequences of today,” said Mr King.

“I will defer sentencing for three weeks, though there is some inevitability about this.

“He is required to attend the court.

“Details of his time in Blue Stone must be brought before the court,” added the judge.

The case was adjourned to February 24.