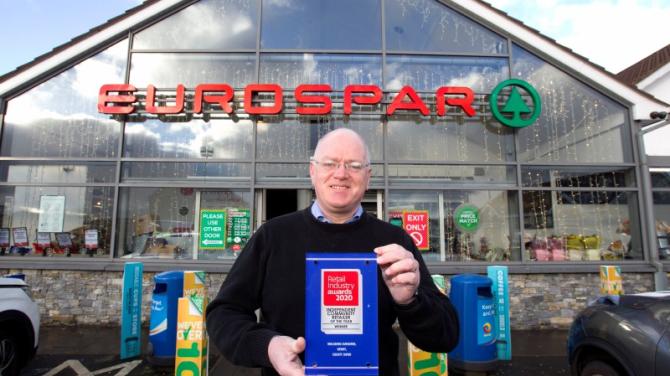 NEWRY’S Mulkerns EUROSPAR has started the year as they mean to go on, bagging an array of awards from two top UK-wide retail award schemes.

At the Retail Industry Awards Enya McAteer, a member of the team for the past year, also took home the Newcomer of the Year title.

The business also received Highly Commended for Kelly McKeown in the Manager of the Year category, and for Best Use of Technology, earning the store a total of seven accolades in the past two weeks.

In their entries, the team shared their community focused initiatives with judges, from colouring competitions raising funds for Barnardos NI and Women’s Aid Armagh & Down, to coffee mornings, charity bike rides and everything in between.

The bespoke community and charity partnerships the supermarket’s teams were involved in during a difficult year also included a Steak Night which raised £20,000 for The Southern Area Hospice.

Judges said Mulkerns was a “wonderful example of a community store” and “It is one of the best stores I have ever had the privilege to judge”. Another added, “it’s a shining example of how a business can be part of the community from which it derives its trade and people”.

The Retail Industry Awards commended Mulkerns for being “customer-centric” and were impressed with the efforts taken to increase food-to-go sales, increasing sales by 25% in just 12 months thanks to meal deals, “fakeaways”, specific celebratory themed days, resulting in judges saying Mulkerns has “their finger on the pulse of new food trends”.

Taking its influence in the community seriously, the retailer committed to Zero Waste Wednesdays to communicate its new sustainability initiative to shoppers, encouraging the community to make little changes for a big difference. The campaign earned them the Most Sustainable Retailer Initiative of the Year thanks to the introduction of compostable packaging for the butchery and salad bowls, the removal of 80% of its plastic packaging from fruit and veg, cleaning product refill stations and reusable cups for hot drinks.

Rounding up the impressive flurry of awards was Enya McAteer, taking home the Newcomer of the Year Award for her implementation of many productive initiatives and policies since she joined the team 12 months ago. Judges were extremely impressed with how McAteer has used her experience to “deliver a great retail environment for the community”. One judge said; “Her range of retail skills is very impressive. Add to this her ability and willingness to work in every department… she clearly leads by example”.

Terry Mulkerns is bowled over to have such a fantastic start to the year; “I am so proud of how the team has brought the store and the whole community through the past year. These awards just go to show that we are performing at a level that sets the standard for community retailing across the UK.

“Engaging with local schools, charities and community initiatives is so important to us as a team, as well as providing an example for sustainable living and wellbeing, and importantly, making it accessible.”

Patrick Doody, Sales & Marketing Director at Henderson Group added; “We wish to send huge congratulations to the Mulkerns EUROSPAR team for all their extra effort in a year where their community really needed them as a hub of engagement and safety.

“We are constantly inspired by what our independent retailers do for their communities, from school initiatives to making health and wellbeing easier, and Mulkerns more than deserve these awards.”