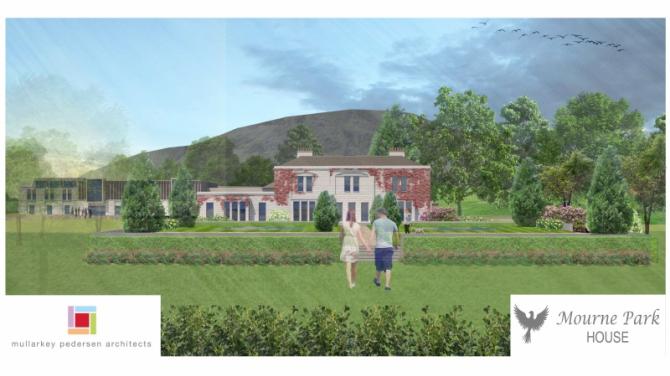 It had been anticipated that work on the site would have created 430 construction jobs and this process alone would contribute over £30Million to the local economy.

Once completed and open for business it was predicted that 120 jobs would be secured with the hope that the venue would attract some 55.000 visitors per year.

However, after months of negotiations, planners and the applicant have been unable to resolve issues in relation to the planning application.

The Planning Department say they have now assessed, consulted and advertised four versions of the proposal. The original submission and three revisions.

“We have also facilitated a meeting with the Agent, Applicant and HED in December 2020 to ascertain if a common consensus could be achieved,” according to the Planning Department.

Tomorrow, Wednesday, the Newry, Mourne and Down Council’s Planning Committee will meet to discuss the application which Planners have recommended for refusal.

A request for speaking rights at the meeting has been made by Karl Pedersen, Architect, and Marion Russell in support of the application.

In summary, planners have sited a number of reasons as to why the application should be turned down.

They state that, if permitted, the proposal would adversely affect the character, setting and historical interest of the listed building on the site.

The Planning Department go on to state: “If permitted the proposal would adversely affect the setting of the listed building as it has not been demonstrated that the detailed design respects the listed building in terms of scale, height, massing and alignment.”

In a submission on behalf of project architects Mullarkey Pedersen they argue that the proposed application would see the rescue, restoration and redevelopment of the historic listed buildings within Mourne Park.

“Without this intervention the entire site would continue to degrade rapidly to it’s ultimate demise.”

The central block of Mourne Park House was damaged by a fire in May of 2013, at which time plans were being drawn up to turn the property into a boutique hotel.

In July of last year, the owner of Mourne Park House, Marion Needham Russell, revived plans to convert the property into a hotel and a subsequent planning application was submitted.

In July of last year, a spokesperson for project architects Mullarkey Pedersen said: “The proposed development recognises the character of the existing buildings and courtyards and compliments these with considered interventions. These interventions take reference from historic structures and built forms found within Mourne Park, some of which have been destroyed over time ( the lake boat house for example). The interventions aim to engage directly with the surrounding context and therefore enrich the special sense of place.

The Current ownership of Mourne Park dates back to the founder of the Kilmorey Family's Irish Estates, Sir Nicholas Bagnall, who was granted extensive lands in Newry and Mourne in 1552 by Edward VI.

Mourne Park House was extensively re-built in 1806 on the instructions of the 12th Viscount Kilmorey, later the 1st Earl of Kilmorey. Later extensions were made in 1820 and again in 1859 and 1920.

The main family seat was at Shavington in Shropshire, with Mourne Park used as the Holiday home. It was designed and used for lavish entertainment and house parties for the visiting Earl and often a Royal retinue from England. Indeed, over the centuries many famous people of the day have stayed in Mourne Park, including Errol Flynn, The Queen Mother, General Patton, Dame Melba and Percy French.

During World War II, the house was used by British and US regiments before they were deployed to France.

The last earl to live in the house died in 1961, and ownership of the house has since passed through the female line to the current owners.