Council management address all issues as negotiations with Unions conclude 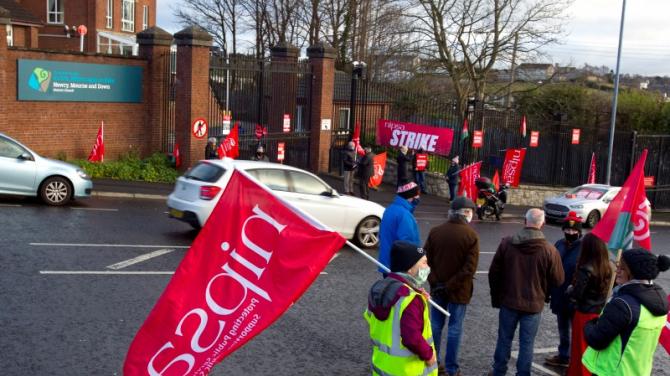 NEWRY, Mourne and Down Council have agreed to pursue a job evaluation, similar to that in other Council areas, and Unions will play a role in drawing up job descriptions.

Trade unions representing workers at Newry, Mourne and Down District Council issued the following statement concluding their industrial action after management moved to address longstanding pay and conditions issues, some of which were inherited from the formation of the Council in 2015.

Longstanding pay issues arising from the formation of super-councils in 2015 will now be addressed in a “comprehensive agreement” which will avoid up to 1,000 employees taking once more to the picket lines in 2021.

A work to rule policy was due to be engaged by council workers in early January, however following intensive talks with the unions, this was called off to further discuss and offer on the table.

The hard-won agreement comes after a ‘special meeting’ of NMDDC , which played out behind virtual closed doors.

In a joint statement, issued on behalf of the Trade Unions, they stated that all issues had been addressed by Council management.

“The four trade unions have concluded our industrial dispute after management at Newry, Mourne and Down District Council moved to address our members’ issues. This dispute centred on a number of issues: the flawed job evaluation process with no panels and no input into job descriptions, threats to allowances, the application of the council’s redundancy policy, adherence to TUPE policies, and pay equality for workers from both legacy councils including recognition of service.

“Management has agreed with trade union side to pursue a job evaluation process similar to that in other council areas; they have agreed that all roles, responsibilities and duties which currently attract allowances will continue to do so; that trade unions will have a role in drawing up job descriptions; and that negotiations will open on a new redundancy policy, without any preconditions.

pay inequality, management has agreed to a timetable and resources necessary to conclude full pay harmonisation by the end of the year. Where pay anomalies have arisen as a result of the council merger in 2015, staff accepting the newly negotiated job description and compromise agreement and suffering any detriment will receive compensatory payments in line with earnings and time served, ranging from £500 to £7,500.

“All issues of concern having therefore been addressed by council management, the trade unions are happy to be able to call an end to this industrial dispute. It is unfortunate that the delay in management taking these steps previously led to workers being forced to take industrial action in the middle of winter and we regret the unnecessary disruption to the public that resulted.

“The successful conclusion of this dispute demonstrates once again the importance of workers collectively organising to win improvements through their trade unions. The trade union negotiation team would like to thank their members who have successfully prosecuted this campaign for pay equity. We would also like to thank the wider public whose consistent support for the workforce was decisive in ensuring such a positive conclusion.”

Newry, Mourne and Down District Council and Council Senior Management are pleased that the JTUS have confirmed their recent Industrial Action has been concluded.

Bringing legacy Council’s together in 2015 resulted in a number of differences in terms and conditions of employment across the Council. The agreement reached with the Trade Unions resolves differences in basic pay.

The Trade Union side refer to a timetable and resources to complete full pay harmonisation by the end of the year. The Labour Relations Agency agreement nor the subsequent legal agreement included a timetable however Council Management look forward to working constructively with the JTUS going forward.”