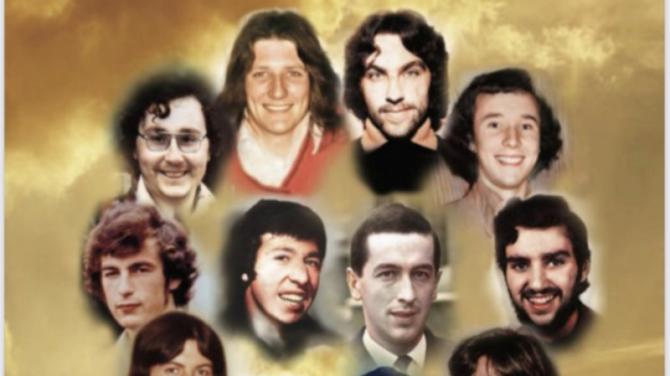 A SOUTH Down victims’ group has raised its deeply held concerns for children over a 40th anniversary event commemorating the 1981 Hunger Strikes.

The initial educational issue on a period of the Troubles for young people was raised by Northern Ireland Children’s tsar Koulla Yiasouma warning against the potential “indoctrination” of youths.

This year the loss of 10 republican prisoners campaigning for their right of political status during the Troubles in 1981, will be remembered in a programme of events across the North.

Locally the death of Hunger Striker, Raymond McCreesh (24) from Camlough, a former St Colman’s College student, who has a play park named after him on Newry’s Patrick Street, (attracting some controversy linked to the Kingsmills Massacre of 1976), will be remembered.

However, it is the words of the late Fermanagh/south Tyrone MP, Bobby Sands (27), the first IRA volunteer to die in the Hunger Strikes on May 5, 1981 that has now caused uproar with a victim’s organisation.

The now famous quote of, ‘our revenge will be the laughter of our children’ is to be part of the title of a Hunger Strike 40TH Anniversary event in south Down taking place on date of Bobby Sands’ death.

The art event has been organised by South Down National Hunger Strike Commemoration Group and is supported by Sinn Fein.

The programme, ‘The Laughter of Our Children’, will witness music, songs and ballads with children in both English and Irish.

The NI Commissioner for Children and Young People has gone on to further add that all children had a right to “access information in a balanced and open manner”.

Spokesman for ‘Innocent Victims United’, Kenny Donaldson has expressed his concerns over the republican memorial for children.

“We note the significant comments from the Children’s Commissioner who has publicly expressed concerns that there is a prospect of ‘indoctrination’ of young minds, this is a serious indictment and one which Sinn Fein and the wider Provisional Republican Movement should take heed,” said Mr Donaldson.

“We further call upon the Children’s Commissioner and/or other statutory bodies to monitor the development of this event and ensure that there must be no abuse of children.

“The Provisional Republican Movement (complete of Sinn Fein) have outdone themselves in terms of the programme of events they have organised to commemorate, to romanticise and to glamorise the Hunger Strikes, where 10 convicted terrorists completed suicide with significant information existing that the leadership of the Provisional Republican Movement were involved in ensuring that the hunger strikes led to deaths and guaranteed martyrdom.

“Concerted efforts have taken place over four decades to try and turn the truth of that time on its head, that somehow those who died did so for a noble cause, that they were poets and men to be revered within society.

“The truth is that 10 convicted terrorists (many with murder crimes) took the choice to die, their victims did not have such a choice, nor dud the 47 people who died outside the Prison walls over the period of the Hunger Strikes due to terrorism and other forms of civil unrest.

“Some of the events planned are beyond words, the South Down National Hunger Strike Commemoration Group for instance have organised an event branded, 'The Laughter of Our Children' a reference to Bobby Sands line; 'Our revenge will be the laughter of our children’.

“Parents of the children being targeted and politically groomed for these types of events need to waken up and realise the damage they are inflicting upon their children.

“The south Down event is nothing short of child abuse, and in a very sinister political form.

“The Provisional Republican Movement doesn't educate, it seeks to indoctrinate.

“Laughter of our children is cruel language to use given the history of the Provisional IRA’s record (and indeed that of other terror groups) in murdering children, in recruiting children into their ranks and radicalising them.

“What has that movement got to say about the murders of the two youngest children of 'The Troubles,' little Alan Jack at just five months murdered by the Provisional IRA in Strabane or the murder of six-month-old Nivruti Mahesh Islania murdered alongside her father Maheskkumar Islania in the then West Germany or the dozens of others who were robbed of the opportunity to laugh because of a death cult which played God, deciding who should live and who should die?

“People need to be clear that the Hunger Strikes were a deeply damaging period of our history, where further lives were traded and sacrificed by those who were the puppet masters for an isolationist and exclusivist ideology which has never brought Protestant, Catholic and Dissenter together in unity of life, sadly it has achieved this in death through its murderous actions, added Mr Donaldson.

The involvement of the children has been described on the event literature, that will act as 'an educational tool'.

Newry Mourne and Down District councillor, Alan Lewis (UUP) has condemned the actions of those who have organised the event.

“Annually Sinn Fein and their cohorts in the national Hunger Strike commemoration group set out on a coat trailing exercise, designed to legitimise the actions of those who terrorised Northern Ireland before as a last resort turned their violence upon themselves,” said Mr Lewis.

“If there is to be a reflection of the Hunger Strikes, let that reflection be focused on the truth of the crimes for which these men were imprisoned.

“This event is beyond sickening, using children to eulogise terrorists, this continual and increasing attempt to radicalise children for the benefit of republican propaganda is reflective of why bigotry and sectarianism remains a present and ever increasing plague on society, damaging community relations across society.

“Those groups, schools and organisations which are taking part should hang their heads in shame, I call on them to reflect upon the damage this type of manipulation could do to young minds.

“The mistakes of the past should not be progressed through the innocence of a new generation,” he added.

The Newry Democrat contacted Sinn Fein for a response to the stance from the victims’ group on the ‘Laughter of Our Children’ event.

“This commentary is crass and disgusting,” said the spokesperson.

“Everyone has a right to remember their dead in a dignified and respectful way, as enshrined in the Good Friday Agreement.

“The references to children taking part in these events are particularly nasty.

“It is important we develop an understanding of the events of the past and we would encourage people to take part in these educational events,” added the spokesperson.

A full list of the 30 page programme for the 40TH Anniversary Hunger Strikes commemoration has been launched this month can be viewed online with most events taking place virtually due to the Covid-19 pandemic.