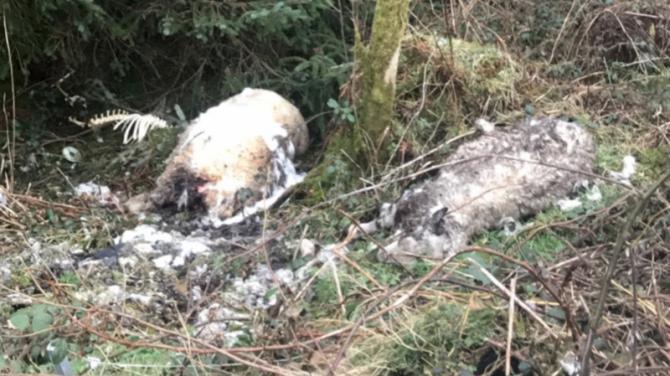 A CONSCIENTIOUS teenager has raised the alarm after chancing upon an illegal dumping ground for dead sheep in the Hilltown area.

Hannah Fegan is an 18-years-old A’ Level student from Newry who, while on a walk with her sister, discovered the remains of a number of animals. The stench of the carcasses was, in her words, “stomach-turning.”

She told the Democrat, “I’ve informed Newry, Mourne and Down District Council of the situation and informed the Sínn Fein office in Hilltown, too, but my concerns have been brushed aside.”

Explaining what she had discovered, she said, “On Sunday, March 6, my sister and I were on a walk at the Yellow Water picnic site. On the way we decided to walk the road rather than the trail because the ground was flatter.

“As we walked along we noticed what seemed to be some sheep’s wool on the side of the road. I’d no reason to think there was anything unusual about that. But when I stepped in to take a closer look, I found it was a dead sheep. Again we thought nothing of it, we just assumed it had just been hit on the road and had then been moved over there.”

But that was only the first of a number of increasingly unpleasant discoveries.

Hannah continued, “As we continued our walk we found another dead sheep. And when we took a closer look we saw a lot of sheep remains - skulls, spines and bones- all over the place.”

Worse was to follow, for having walked on a short distance the sisters discovered another sheep, only this time in a stream, and then two more, one of which was decapitated. To these gruesome finds can be added a animal’s rib cage, plus a pair sheep whose remains had been wrapped up in farm feeding bags.

“Given what we’d seen we knew this was a case of illegal dumping,” Hannah said. “But what concerned me in particular was the dead sheep in the stream. What if it were to contaminate the water?”

First thing the following morning (Monday, March 7), she contacted the USPCA who advised her that the matter would have to be reported to animal welfare. He was told she could do by going through NM&D District Council. In accordance with those instructions she rang the council and was put through to Environmental Health.

“I explained all of what I had found to a woman who said she would pass this information on,” Hannah said. Clearly she must have done so, for in Hannah’s own words, “Later that day I received multiple phone calls from an environmental officer asking for directions to the place. I gave her as much help as I could and directed her where to go. But as she was still contacting me at 4pm, I said that we would drive up, at our own expense and meet her.”

Although this entailed a 25-minute drive for Hannah and her sister, they undertook it simply in the hope of helping to solve a problem about which they were genuinely concerned.

“We met her and showed her exactly where it was,” Hannah said, adding, “The smell of the dead animals was insane. The woman from the council took some photos and said she would get contractors out to clear the area.

“When I raised my concerns about the possibility of water contamination, she said that would be taken care of. She was a lovely woman, but I still wasn’t completely content about the situation so I decided to ring Sínn Fein’s Hilltown office.”

There she voiced her concerns to a woman, following which a local councillor phoned to ask Hannah where exactly she had made this macabre find.

“I told him exactly where to go and I sent him photos we had taken. But the next day, on Facebbo, I discovered the councillor had posted the phototographs I’d sent him - and in the caption he was asking for directions to the place where they had been taken as it needed to be reported to Environmental Health.

“I was really frustrated by that because I’d already explained to him this had been done and that I’d actually met with a woman from Environmental Health!”

Understandably, she was pretty annoyed at what appeared to be a case of the right hand not knowing what the left was doing and, as a result, things continuing to go nowhere other than in a circle of growing confusion and inactivity in terms of solving the problem.

However, beneath that road-to-nowhere post, another man had joined in with the news that sheep dumping is something that goes on all the time in this area. Indeed, he was able to confirm that, over a three-year period, he had reported it on a number of occasions and nothing at all had been done to solve the problem.

Hannah told the Democrat, “I’m absolutely disgusted at the local council for ignoring this issue. My stomach was turned when I saw what was a literal sheep graveyard in front of me in what’s meant to be an Area of Natural Beauty. If it sickened me, an 18-year-old, can you imagine what impact that might have had on a child? I went back up a week later to see if anything had been done. but nothing had.

“The least the council could do is clear it up. I just feel that I and others like me are being completely ignored. No-one in positions of authority or responsibility – either the council or local political parties - seems to care about this issue.

“That’s why I have contacted the Democrat; this needs to be brought to the attention of the local community. I’m not even from Hilltown; like I said, it’s a 25-minute drive for us to get there. But I think this is serious enough to merit being brought to the public’s notice.

“Because I’m only 18, I feel that’s probably why I’m not being taken seriously. I reckon they think I’ll ‘just get over it’. But I won’t, because this is a something of public concern that really does need to be taken seriously.”