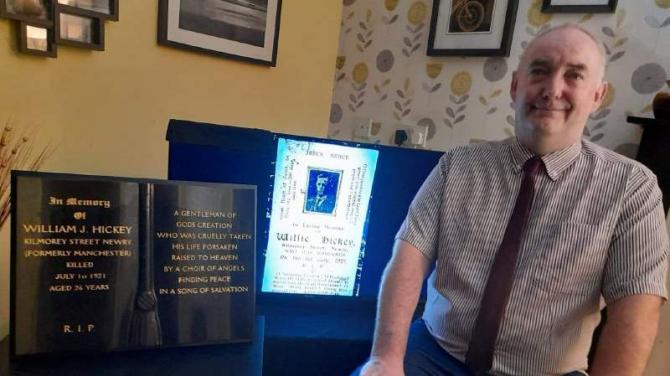 NEWRY historian John McCabe in conjunction with the Lisdrumgullion Community Group have completed phase one of a project to coincide with 100th Anniversary Commemoration of the brutal murder of an innocent man.

Mr. McCabe revealed "on July 1st it will be the 100th Anniversary of the murder William Hickey with a Council Right of Way off the Armagh Road in the townland of Lisdrumgullion named after him where in a cattle shed his mutilated remains where discovered back in 1921.

Having a childhood fascination about the Hickey case and observing over the years the deteriorating condition of Hickey's grave at Plot C Number 38 at St Mary's Cemetery in Newry I resolved to do something about this."

Mr. McCabe said that giving his interest in history and Hickey's Lane being part of his Community with the Anniversary approaching he set about to make things happen.

He contacted Canon Francis Brown and the Newry Parochial Parish Secretary both of whom were very obliging and helpful and with the assistance of a former neighbour a contractor who wishes to remain anonymous set about upgrading the grave and painting it and replacing an old rustic cross with a brand new headstone.

He continued "We are a non funded group so the contractor kindly paid for the headstone with me penning the verse which I wanted to personalise, to add as a headstone inscription.

Hickey as you will read was killed under the most cruellest of circumstances and his body being left forsaken and abandoned in a shed on a lonely country lane. In life he was a kind man, working for Saint Vincent de Paul and being a member of Newry Cathedral Choir and from this the headstone reads:

'A gentleman of Gods creation who was cruelly taken, his life forsaken. Raised to Heaven by a Choir of Angels finding Peace in a Song of Salvation.'

THE BACKDROP TO HICKEY'S MURDER

Many of us may recall decades of the previous troubles primarily in the North of Ireland with just under 2,000 civilian deaths occurring.

Yet if we regress back to a two year period in the early 1920s in the Newry and District area it was to witness a horrific period of murder and mayhem.

Having come across one listing from 1921 to 1923 it made for grim reading but omitted the brutal murder of Hickey and also the shooting dead of a 'Special' RIC man the day before on a busy street in Newry.

The list reads that six people were killed by the IRA in the "Altnaveigh Massacre," four young men were shot dead by the 'security forces' at Ballymacdermott, The Egyptian Arch ambush claimed the lives of three IRA men, two teenage girls were shot by British soldiers at Jonesboro, two brothers were shot dead by 'B' Specials at Grinan, two farmers were killed by the RIC at Lislea, while two so-called informers were 'executed' by the IRA at Camlough.

The day before Hickey's death, a 'B Special' RIC constable Hugh Gabbie, was gunned down on a Newry street in broad daylight and this, amongst other things was to secure poor Hickey's fate.

William J. Hickey was a single 26-year-old born of Irish parents in Manchester. He'd only been living in Newry five years and had taken up employment as a manager of one of the then two JJ McArevey furniture stores in the town.

He was prominently associated with the local shop assistants unions and never mixed himself up with any political societies. He had an interest in the GAA and sang in Newry Cathedral Choir, as well as helping Newry's poor and needy through his membership of St Vincent de Paul.

These factors were enough in the mindset of his killers who were 'B Specials' colleagues of Hugh Gabbie and not Black and Tans to warrant a so-called 'reprisal.'

The intended targets of the death squad were two IRA men who lived at Mary Street, Newry, Bob Kelly and Edward Fullerton with the latter recalling that fateful night in an interview with Irish Bureau of Military History given in September 16th 1953.

Edward revealed "A party of RIC and Specials came along to my house at night time and demanded admission. On this particular night I had come home for a change of underwear and was actually in the house when the party of Specials demanded admission with family there also.

The Specials who were looking in were disguised with beards and when they rapped on the door seeking admission there was no reply from us. They then had a discussion in the street and I heard one of them saying "We were here the other night and he wasn't there, so there's no use in forcing our way in" the remark referred to me.

They then went over to Bob Kelly's house, which was nearly opposite ours, and demanded admission there. While they were rapping at our door Mrs. Kelly - Bob's mother - even then an old woman, had heard them and she immediately awakened Bob and told him what was happening.

Having put on his clothes, Bob left the house, went into the Clanrye River at the back, which was in full tide, and so he was able to get to a neighbouring friendly house.

When the disguised policeman rapped at Kelly's door Mrs. Kelly let them in and they rushed upstairs to Bob's bedroom and felt the bedclothes, which were warm. They came back to the old woman, demanding to know where Bob had gone to, but she did not give them any information, and they abused and beat her in an effort to extract the information required.

When this party of disguised policemen left Kelly's house, they went around the corner into Kilmorey Street and went into the house of William Hickey, who was then manager of McArevey's furniture store.

They pulled Hickey out of bed, brought him out into the street and, putting him into a lorry that was waiting, they drove off with him. Next morning Hickey's dead body was found in a cattle shed on the Armagh Road, Newry.

The body was in a terrible mutilated condition, in addition to having been shot,he had been chained apparently to the back of the lorry and dragged for some distance along the road.

His clothes were torn and portions of his flesh were also torn from his body leaving him in the cattle shed and they tore his heart out and left it lying on his breast.

Poor Hickey had never been a member of the IRA and he was not even a member of the Sinn Fein Club, they wanted a victim that night apparently and, having failed to get either myself or Bob Kelly, as a last resort they picked on the unfortunate William Hickey."

On 1st July 1921, as Hickey slept in Miss McGuigan's lodging house, 13 Kilmorey Street Newry (todays Bridge End Bikes) there was a loud banging and knocking at 1.45am, which grew in intensity as if the door was about to come through.

According to Miss McGuigan, a number of armed and disguised men came to the house and, knocking loudly, woke the residents.

Thinking it was a ordinary raid, her brother went downstairs with a lit candle and opened the door.

Upon his doing so, the raiders ordered him to snuff out the candle and, in darkness, they rushed past him, making their way up to the poor unfortunates room.

They pulled him out of bed and he begged and pleaded with them, asking them what they wanted with him. He was then dragged downstairs.

Miss McGuigan asked what they were going to do with him, to which one of the men replied that Hickey would be back within an hour.

The raiders then left with a partially dressed Hickey and it wasn't until 10am the household learned that he had been 'done to death' as it was described at the time 'under circumstances of terrible cruelty.'

Two hours earlier the first to discover the gruesome remains at 8am was a young boy, Craig, son of James Craig of 107 Canal Street whom owned and farmed land in the townland of Lisdrumgullion.

The little boy went to take cattle to be milked and upon entering the cattle shed found Hickey's mutilated corpse. In sheer terror he ran from the Armagh Road to Canal Street where he reported the discovery to his father.

When Mr Craig arrived at the scene he discovered Hickey's remains riddled with bullets and one of his trouser legs badly torn.

Poor Hickey's sole companions were the curious cattle gathered around him and alongside his body Mr Craig found a note which read 'Convicted Spy-IRA.'

This transpired to be a cynical ploy to apportion blame on Republicans with the 'Specials' in collosion with the Royal Irish Constabulary having carried out the murder.

Mr. John McCabe stated "Now that phase one of the restoration of William Hickey's grave has been completed it will ensure that future generations will know where he is buried and perhaps the public in passing may stop and say a prayer.

On the evening of Thursday July 1st 2021 the Lisdrumgullion Community Group will be holding a Commemoration service at William's grave at which I will be giving an oration on this tragic story.

This will be a public event and all are welcome and we are currently looking into the possibility of getting some kind of Commemorative stone erected at Hickey's Lane also.