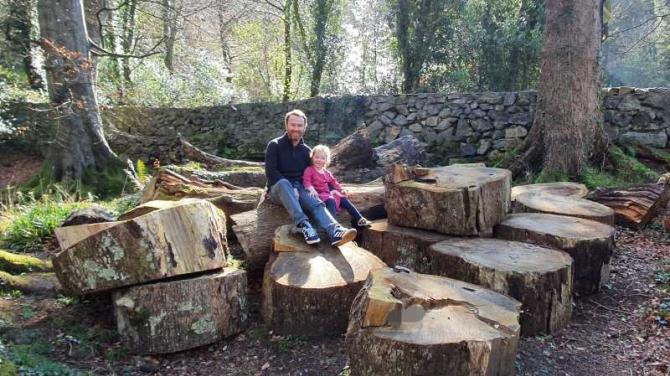 FOLLOWING Newry, Mourne and Down District Council’s acceptance of the idea that Kilbroney Park’s barbecue area will serve as a free-to-use outdoor classroom for schools, the man behind that project has come up with another one.

Councillor Mark Gibbons told The Democrat, “Currently I’m working with the Council and Mourne Heritage Trust to see if the adjoining area of old tree rings could be sculptured into miniature chairs and tables and used as an additional seating area for children.”

Explaining what this would entail he continued, “This beautiful section of the park is just beside the barbecue area. But it’s not used for anything, so as I see it, that’s a waste of a resource that’s already there.

“As well as complementing one another, those two areas would enhance our children’s experience of the environment and their knowledge of the natural world.”

While, in his own words, “nothing has been guaranteed at this stage,” Councillor Gibbons nevertheless expressed his optimism that these two ideas will become reality in the near future.

“Following a number of recent meetings I’m confident that this project will happen soon,” he said.

The Independent Councillor for Crotlieve was smiling as he admitted, “I have the Council and the Mourne Heritage Trust tortured, but I’ve promised everybody involved that if this project gets the green light, I’ll stay clear of the chainsaws and let the experts work away!”

Beneath his jocularity, Councillor Gibbons is deadly serious about what he sees as being the benefits of outdoor learning and its potential to increase children’s awareness and appreciation of nature. As he sees it, they can only benefit from schooling in such an uplifting environment.

As for when this might happen he said, “Once the Covid restrictions start to ease I think we’ll see movement on this pretty quickly.”

Elaborating on his vision he continued, “That barbecue area has been sitting idle for a long time; I think it’s fair enough to say that for 95% of the year it isn’t being used. So this is an opportunity to make something of a facility that currently is unused most of the time.

“As for that other area - beside the barbecue site – it’s totally unused and has been for years. But by turning it into a second outdoor classroom with carved seats and tables, we bring it back to life.

“There are discarded oak logs that have been lying there beside the bridge for years, so I’m in talks with the Council and Mourne Heritage Trust, trying to persuade them to avail of that wasted area in the hope of finally finding a use for it. All it needs is a bit of creativity.

“At this stage the signs are really positive. I was in talks with them before the Easter holidays, so with things starting up again after that break, hopefully we’ll have some very good news to report in the near future. I’m excited about all of this.

“Those big oak slices, which have been lying there doing nothing for years, could be made into something beautiful using the area’s own natural resources. I know groups which would be happy to take their children there for outdoor activities, so why not create a nice, carved-out seating area to encourage them?” was his rhetorical question.

“There are so many different trees – all with their own type of wood – so with just a wee bit of thought and some creativity and imagination, it could be turned into something really special.

“And the beauty of it is that this could be done at very little expense. Instead of paying thousands of pounds for some lumps of plastic or metal, you’d be using what nature has already provided. Local craftspeople could use that to create something beautiful to be enjoyed by others for years to come.”